‘Sup? I found two beetles on my kitchen floor this morning as I was sweeping up. One of them scuttled for the corner but the other ran straight into the dustbin, which gave me little choice but to dump him into the garbage along with everything else. That’s evolution in action, folks. One will go on to found a line of successful Corner Beetles, the other a genetic dynasty of insects that enjoy hanging out in little piles of coffee grounds and cat hair. Anyway, let’s reckon with a few things.

1. GRAVE OF E.T. DISCOVERED  One of the most enduring stories in videogame history appears to be true after all. Back in the early ’80s, Atari’s legendarily awful E.T: The Extra Terrestrial tie-in game was rushed to market in order to take advantage of the movie’s popularity. The game proved to be so unplayable that thousands of unsold copies were said to have been dumped in a concrete-covered landfill somewhere in New Mexico. Well what do you know.

2. APPARENTLY BEATING WOMEN IS ALL PART OF THE AMERICAN DREAM  Entrepreneur and woman beater Gurbaksh Chahal, who was caught on video hitting  his girlfriend 117 times over the course of a half-hour, managed to escape jail time but has been booted from the board of his company. His defense, apparently, is that he “lost his temper” becasue  his girlfriend was sleeping with other people for money. That’s right, the old “I didn’t do it and anyway she was a whore so if I did happen to beat her brutally, you understand” defense. To sum up: Bam*117=Justified. He also mentions the American Dream for some reason.

3. AT LEAST YOU CAN’T PUT A COPYRIGHT ON IRONY  I keep on coming back to this story because I can’t quite believe it. But here it is anyway: publishers Lawrence & Wishart are claiming that the Marxist Internet Archive is infringing on the company’s intellectual property by hosting works from the 50-volume “Marx Engels Collected Works.” I would have thought that Marx and Engels’ writings would have passed into the public domain long ago, but intellectual property and copyright is a tangled and thorny issue, and most attempts to navigate through it end up in torn clothes and deep scratches and insect bites. The Archive has promised to delete all the offending texts by May 1, which some of you may know as International Workers Day. Now if you’ll excuse me, I’m going to go cry into my means of production.

4. WHOOPS  It seems that some of the bodies sent home to families after the South Korean ferry disaster were, um, not the right bodies.

BONUS FOOTWEAR SIGHTING  I saw this shoe on a fence on 14th Avenue yesterday. Better claim it if it’s yours. 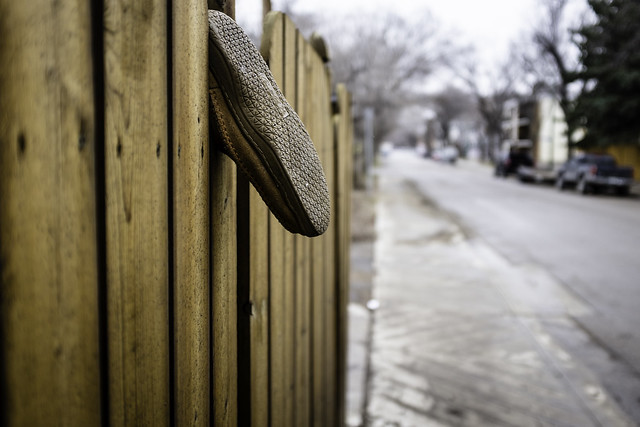