TIFF is winding down: The last day for press and industry (and yours truly) is this Friday. So many movies, so little sleep. These are the movies currently making noise in Toronto (and not for the best reasons.)

The Last Circus: Spanish director Alex de la Iglesia has mostly failed to conquer the North American market, despite being a marquee name in Europe (he just won the best director prize in Venice, but probably because he was friends with Tarantino). His pitch black comedy The Last Circus probably won’t open the doors of the Canadian market for him, but you would have to look hard for a more insane flick. Two psychopathic clowns battle to death for the love of an unbalanced circus acrobat with the Spanish Civil War and Franco’s dictatorship as background. De la Iglesia inserts his characters into some of the most traumatic events the country endured, and while it lacks coherence, The Last Circus is so gleefully violent and demented, it’s hard to hold it against it. Three dumbfounded prairie dogs (out of five). 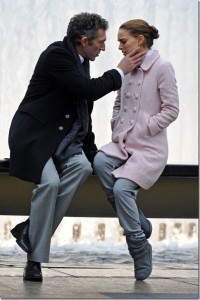 Black Swan: Thanks to the skillful direction of Darren Aronofsky (Requiem for a Dream, The Wrestler), Natalie Portman is now the frontrunner in the Oscar race. Portman is sensational as Nina, the ballerina succumbing to the pressure of being the lead of the New York Ballet production of “Swan Lake”. (As somebody who has seen “Swan Lake” way too many times, I never realized the same girl regularly plays the Swan Queen and the Black Swan.) It’s the need to tap in her dark side that consumes Nina, but somebody could be exploiting her unraveling for personal gain. Unseemly special effects, mundane but disturbing images and superb performances by Portman, Vincent Cassel and Mila Kunis (!) put the Black Swan in the same league than The Shining. Aronofsky not only keeps a potentially absurd premise from derailing, but turns it into a thrilling experience. Four and a half prairie dogs or ten swans (in swan scale).

Stone: So far, the festival biggest bomb. Truth is, the name of Robert De Niro in the credits doesn’t mean much anymore, but now he is dragging Edward Norton down with him. As the unlikable parole officer of a state prison, De Niro gets conned by a convict claiming a religious conversion and his smoking hot wife (Milla Jovovich) who seduces him. I kept waiting for a twist that would make Stone remotely interesting, but it never came. Considering this is the second horrible movie De Niro and Norton do together (the first one was The Score), somebody should request a restriction order to keep them away from each other. One prairie dog bored out of its mind.

13 Assassins: Japanese filmmaker Takashi Miike works too much for his own good. He pops one or two movies a year that seem half-baked compared to his most notorious efforts, Audition and Ichi, The Killer. For most of its length, 13 Assassins seems just as mediocre, even cheap, but the exhilarating final half hour is among the best Miike has ever directed. In the tradition of the American western, twelve samurais and a savage agree to confront the sadistic Lord Naritsugu, who gets a kick from killing and maiming his people and may push feudal Japan into a civil war. The final act pitches the samurais against Narigatsu and 200 of his men. Believe it or not, Miike shows restrain, making the looming carnage all the more effective. The kicker: Fire bulls (grab a bull, set it on fire, and send it in the enemy’s direction). First 90 minutes: Two prairie dogs. Last half hour: Four dogs.

Tabloid: Once upon a time, there was a beauty queen called Joyce McKinney. In the early Seventies, Joyce fell in love with a Mormon guy and she thought it was reciprocal. The Mormon disappeared and Joyce sunk in despair. Years later, the love of her life reappeared in England, but he didn’t seem to share the same feelings anymore. What’s a girl to do? Kidnap the guy, chain him, jump his bones and hope he’ll come around. That’s just the beginning of a story that gave British tabloids material for years. From outside, the film seems a minor piece in Errol Morris acclaimed career (The Thin Blue Line, The Fog of War), but Tabloid it’s actually brilliant, simultaneously compassionate and critical. The malaise of celebrity obsession and the symbiotic relation between paparazzi and their subjects are deftly deal with. Morris doesn’t pontificate and acknowledges the best way to tell Joyce McKinney story is to point and shoot. One prairie dog cloned four and a half times.