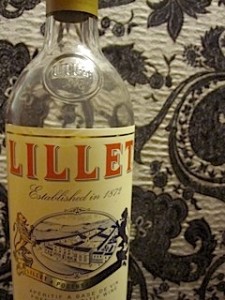 Once you start browsing through vintage cocktail manuals, one of the great frustrations you come upon is the number of curious concoctions one cannot concoct on account of the unavailability of one ingredient or another.

Take for instance this enticing number….

Among internet cocktail scribes (those who contribute to the booze blog-o-sphere — a.k.a. the blogging booze-o-sphere), this is a highly regarded beverage, it’s fame due in large part, I suspect, to Ted Haigh (a.k.a. Dr Cocktail) and his book Vintage Spirits and Forgotten Cocktails (which I highly, though parenthetically, recommend). Of the Corpse Reviver, Haigh writes,

Here is a drink that, more than any other, shows just what delicate chemists golden era bartenders often were. Not only is the drink beautiful to look at, every single ingredient shines through individually in each sip. The combination is harmonious; it’s a slice of perfection.

How could you read this and not want to mix one immediately? Unfortunately, upon visiting any liquor store you’ll quickly discover why this has become a nearly forgotten cocktail: Lillet Blanc.

Lillet is an apertif wine — a blend of white wine and citrus liqueurs. I purchased a couple bottles a few years back in a specialty liquor store in Guelph, Ontario, and can report it tastes rather like a sweet, orangey vermouth.

Unfortunately, beyond the borders of a civilized town like Guelph — stomping grounds of the cartoonist Seth, home of the (lamentably now closed) Biltmore Hat factory (and, to its supreme discredit, also refuge to noted climate science denier Ross McKitrick) — Lillet is very difficult to come by.

In fact, I contacted the makers of Lillet last year and was informed that, in Canada, you can only purchase it in Quebec, Ontario, and Vancouver. And for some reason, as of that email, there was a liquor store in Winnipeg with a few bottles.

What to do? I’ve attempted to use Dubonnet Amber as a substitute, but it isn’t an adequate flavour match and even that has become difficult to come by in Regina.

Well, as it turns out, there is a solution. You can special order it through the SLGA.

To find out what’s involved, I phoned up the Sask Liquor Special Order Hotline at 787-6558 and interviewed Jamin Lohmeyer, the Special Order Coordinator. He kindly walked me through the whole process.

And, seeing as I didn’t manage to get this into the Drink! feature of the current issue, here is that whole interview….

prairie dog: So, if you’re looking for a liquor that isn’t available in a Sask Liquor store, what should you do?
Jamin Lohmeyer: You dial this number. [787-6558 or toll free 877.298.5559] or online go to saskliquor.com and there is a special order — on the left hand side of the screen I think it says, “Can’t find what you need?” You can submit email through there.

pd: What’s available? Can you ask for any crazy obscure liquor and you guys will track it down?
JL: You betcha. Usually, anything that’s available in Canada, we can get. So if somebody’s been to BC or Alberta and they tried this stuff at a restaurant or a winery we can get it.

pd: Take for instance, something I’ve been looking for, Lillet Blanc. Have you ever had a request for that?
JL: You betcha. I think I’ve ordered it too.

pd: I’ve heard you have to buy entire cases when you special order though. Is that true?
JL: Yes, you do.

pd: What would the taxes and duties on something like that be?
JL: The markup is exactly the same as our regular product. We’ll tell people what that is because it’s kind of complicated at some points.

pd: I suspect most of the special orders you get are for wine?
JL: There’s everything. Lots of beer too.

pd: What’s the craziest thing you’ve ever had anyone order?
JL: There’s this vodka that comes in the shape of an AK-47. I didn’t order it, but I know about it because there was a franchisee [who did].

The franchisees can [make special orders] too. So, say somebody is in a small town and they don’t want to buy a whole case, they can go to their franchisee and say, “Hey, will you order this in for us?” and the franchisee can put it on their shelf and then they can sell it to them by the bottle.

And actually, there’s the two specialty wine stores in Saskatchewan, one in Regina and one in Saskatoon. They’re almost all special order. So if somebody is in Regina or Saskatoon, and goes in to those stores, we’ve listed approximately 4,000 special order items.

[Looks it up on the computer]

So, here it is. 4,711 products are the special order products.

pd: Those specialty wine stores, can they handle spirits, or only wine and beer?
JL: They’ve got lots of spirits there. They’ve got rums and vodkas and everything.

There you have it. Getting Lillet Blanc is just one phone call away. That said, while I could see myself laying down the cash for, say, three bottles of Lillet… twelve? That would be a little difficult to justify considering what the dog blog pays for this column. (Which is exactly bupkis.)

If only there was some way to find other boozehounds who’d be interested in pitching in on a case….