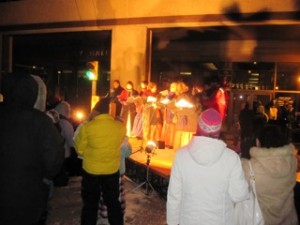 A bit late getting this out this week. Sorry about that.

Tuesday, December 15
PUBLIC WORKS COMMITTEE (4 pm): Considering a recommendation to give to Stantec Consulting Ltd a contract to widen Victoria East from Fleet Street to Quance Gate. The project will cost $655,000 but the city’s portion is only $125,000, the rest will be carried by the federal and provincial governments. So don’t say the feds and province never do anything for you. They’re about to take your city’s most obnoxious stretch of road and make it wider. Actually, I shouldn’t say that. I don’t know if Vic East is Regina’s most obnoxious stretch of road. I only suspect it because it’s so clearly a travesty. Anyone like to nominate somewhere worse?

After the jump, wondering where to dump our snow, guess who’s getting a tax exemption, see what’s going to happen to the cost of your leisure pass….

Also up is a recommendation for the city to start looking into either finding a new snow dump site or redeveloping our current site so it’s up to current the standards of current best practices. Apparently, the spot where city crews dump snow now doesn’t have a liner to prevent water and salt from soaking into the ground. That’s a problem. The current site sits in the city’s north east, in a moderate sensitivity zone of Regina’s Aquifer System. Hey, want to guess how much snow gets dumped there every year (2008/2009 numbers)? Bonus points if you can tell me what per cent of that comes from private and commercial snow haulers.

Also on the agenda are the 2010 Concrete Maintenance Operations Summary, meeting dates for 2011 and Councillor Clipsham will present a report on best practices for sustainability decision-making and planning for cities.

Wednesday, December 15
EXECUTIVE COMMITTEE (11:45 am): Guess which major new player to Regina’s corporate scene — they made headlines when they announced they were moving here — will be getting a five-year, $639,715 tax exemption. That’s right! Mosaic! It will come in the form of a property tax exemption for Hill Tower III and is all part of the Economic Development Incentive plan of 2006.

Next up, is a review of the Planning and Sustainability department’s building permit and development application fee structures and their approval and inspection processes. The department is looking for 12 new people (five building staff, five planning staff and two administrative support staff). They also want to boost the fees they charge so they’ll be operating on a cost-recovery basis. Presently, our planning dept fees — fees for building permits or subdivision development applications — are way below the median rate nationally. Apparently, the development community has been consulted on this and they’re willing to pay higher fees but only if they get faster, better service as a result.

And finally, there is a recommendation to appoint Councillor Fougere to the Regina Downtown Board of Directors.

COMMUNITY AND PROTECTIVE SERVICES COMMITTEE (4 pm): Will be  considering new fees for community services such as leisure passes and facility rentals. Good news! Staff are recommending single admissions, leisure passes and rush ice fees should remain the same in 2011! Facility rental rates, however, will be going up slightly — by about three per cent.

The committee will also consider allocating $26,250 to the transit fare assistance program and it will be naming the city’s weed inspectors and pest control officers. It will also review a reports on paratransit operations and on the condition of the Davin Fountain. Lastly, it will consider meeting dates for 2011.

Thursday, December 16
BOARD OF POLICE COMMISSIONERS (9 am): Will be looking at crime stats for November 2010 versus November 2009. According to the report, crimes against the person are down 3.4 per cent since Nov 2009 and crimes against property are down by 7.4 per cent. Yay! Less crime!

ARTS ADVISORY COMMITTEE (5:30 pm): Will look at report on the visit by some members to Calgary on November 17 to review that city’s best practices for arts development. Also looking at meeting dates for 2011 and the committee’s work plan.

15 thoughts on “This Week At City Hall: Widening Vic East, Corp Gets Tax Cut, Many Fees Changing, Some Not”