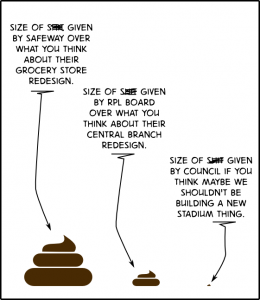 Also on the agenda, the former Salvation Army Citadel at 1772 Montreal St will be considered for a heritage designation. City hall will be hiring three consultants to work on the project to replace Mosaic Stadium — an architectural advisor, an engineering advisor and a fairness advisor. The first two sound pretty straightforward but what’s a fairness advisor? Seems that as the new stadium deal will be going forward as a Public-Private Partnership project, the fairness advisor will be on board to make sure that process is conducted on the up and up.

Oh, incidentally, anyone have any idea why “advisor” keeps coming up as not a word to my spell check? Addvisor. Advissor. Adviser. Oh. No red line on that last one. My idiot computer wants to spell it with an “e”. That just looks dumb.

Council will also consider spending $5 million on security upgrades for city hall. M’thinks they’re more traumatized by that naked man incident from two years ago than they let on. $5 mil seems like a bit of overkill, though.

And those are all the big items. You can read the rest of what’s council’s agenda and read the full report on the city’s website.