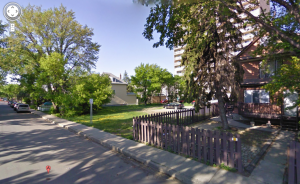 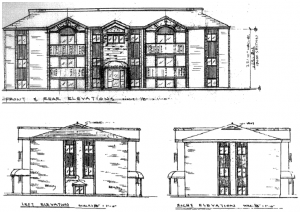 It’s another quiet week at city hall but there is one encouraging item before Regina Planning Commission. The committee will be considering an application to build a low-rise apartment building at 2112 and 2126 Osler St. It’s near the General Hospital. There’s a screen cap of the vacant lot it’s to occupy at left. And a drawing of what it’ll roughly look like when done below.

Nice thing about this is the units in it will be rental and not condos. There’s only 12 units in there so it won’t go far towards fixing our catastrophically low 0.6 per cent vacancy rate.

But still, it’s a start.

Oh, lookit this! A recommendation from the Municipal Heritage Advisory Committee to remove the Crescent Apartments at 1550 14th Ave from the Heritage Holding Bylaw so that there will be no impediment to tearing this building down and putting up a three-storey commercial building in its place, with offices and retail on the ground floor and medical offices on the second and third.

And we’ll only be losing 12 units of affordable rental with the demolition of the Crescent. And that’s not so many. Right?

Of course, it’s exactly the same number of units as we’ll be gaining with the Osler building. And that puts us right back at a 0.6 per cent vacancy rate.*

So much for that start on solving the housing crisis.

Wednesday, February 29
REGINA PLANNING COMMISSION (4:00pm): Also up for consideration this week is a request to put a restaurant on the ground floor of 1916 Dewdney Ave. That’d be where the Supreme Basics Office Supply shop once was. I’m always up for trying a new place to eat so it sounds like a good plan to me.

Lastly, one of the RPC members, Philip Selenski, is requesting staff prepare a report listing any new residential housing developments that are in the review/approval process. This is a great idea.

And that’s it for committee work this week. Once again, there just doesn’t seem to be a lot going on in Henry Baker Hall. I can’t help but feel like things were more action packed a year or two ago. Wonder what’s going on?

ON THE ELECTION FRONT, another mayoral candidate has come forward: Chad Novak, an accountant who is originally from Moose Jaw. His facebook page is here. We’ll learn more about what he wants to accomplish if elected at a March 5 press conference.

That brings the total number of people vying for that top-floor office in city hall up to five: Chad Novak, Charles Wiebe, Jim Elliott, David Loblaw and Michael Fougere.

————————————————————–
NOTE:
* That’s 0.6 per cent according to CMHC. But as we pointed out in a sidebar entitled, Math Is Scary, with the evictions from the Crescent Apartments and the Black Building at 1755 Hamilton, the city’s vacancy rate is now functionally zero.