The Second Time Around: The Master 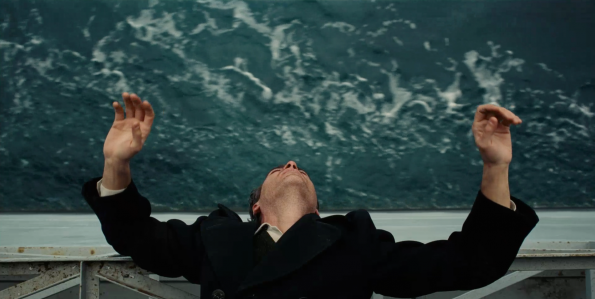 Joaquin Phoenix in The Master.

The Master failed to make an impression the first time I saw it at the Toronto Film Festival. It felt hermetic and pretentious. However, many critics fell deeply in love with the film by Paul Thomas Anderson and topped several “Best of 2012” list.

I decided to give The Master a second chance. While some elements I overlook became more striking (cinematography, the score by Jonny Greenwood), my overall appreciation of the film didn’t improve significantly: It fails to deliver on the promise of exposing Scientology and has no interest in connecting with an audience.

Then, it hit me. The Master is the story of a man and his dog.

Joaquin Phoenix’ character, Freddie Quell, is nothing but a stray animal that follows his most basic instincts. Freddie is adopted by cult leader Lancaster Dodd (Philip Seymour Hoffman), who tries –and mostly fails- to domesticate the creature. But as it often happens with dogs, Dodd enjoys Quell’s company, even when he misbehaves.

I thought I was overreaching until the scene in which Dodd and Quell roughhouse in the garden. In fact, the only rational decision Freddie Quell makes in the entire movie is to abandon Dodd’s movement. Shortly after, the protagonist sheds all remnants of domestication.

If you agree to this reading of The Master, the movie simplifies significantly. It even gains some entertaining value. What doesn’t change is the film unwillingness to reach out to the public. Still two and a half perplexed prairie dogs.