The Plains Is Coming Down (No, Seriously, This Time, They Swear) 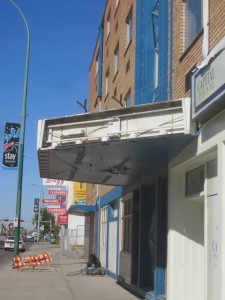 Last night we recorded episode nine of the Ultrasonic Alarm Call, prairie dog‘s fourth most popular podcast. (You can listen to the awesomely hilarious episode eight here and get a list of all the episodes thus far here. Episode nine will go online on Monday, by the way. Mark your calendars.)

And in last night’s episode we announced the winners of our big contest. They were Martin G and Agent W, commenters on this here blog. They identified the sound missing from our audio clue as being the demolition of the Plains Hotel and the start of construction on Capital Pointe. Yep, that mysterious audio clip was a recording made at the corner of Vic and Albert around the time that demolition was supposed to begin at the end of July (according to information I’d been given for this piece here in which we talk about the various liens against the Capital Pointe property).

Well, a funny thing happened this morning. After all the cracks we made last night about how Capital Pointe seems to be floundering, out of the blue, I got an invite from the people at Westgate Properties to a press conference at the Plains Hotel site at 2:30pm today.

Seems something is about to happen and I’m going to have to do some creative editing to the podcast.

According to Greg Black, the spokesperson for Westgate Properties… well, here, I’ll let him tell you….

So, in short, the Plains is coming down September 26 and construction of Capital Pointe is to begin early next spring and be finished by late summer 2013.

And they swear that’s it’s for reals this time.