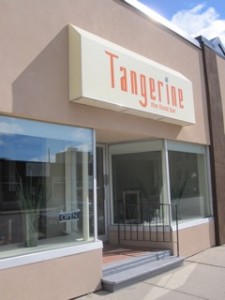 I was walking back from the Farmers Market and discovered that Tangerine the Food Bar (2234 14th Ave) opened a couple weeks ago. How come nobody told me?

We only had time to drop in for a couple salads. Moroccan chickpea & carrot and gingered noodle with cucumber & mango. Wow. Both were great.

That the food is awesome isn’t a surprise seeing as Tangerine is an offshoot of Evolution Catering (which is around the corner so I assume they share a kitchen).

You read that last one right. It’s pop that tastes like gin. They were out of juniper soda today (apparently it’s popular) so I’ll be going back later to get me some. Had a lilac and a cucumber instead. Very nice. The flavours were pretty light and the sweetness is really dialed down. A grown up drink, not liquid candy.

Anyway, in short (and this isn’t an official review, by the way), Tangerine looks to be a fantastic addition to the whole downtown area. I like how it rounds out that little shopping block on 14th with Nature’s Best, Henry’s, Hip 2 Knit and the rest.

So, yet another great eatery opening up a short walk from my house. Have I raved lately about how much more awesome my neighbourhood is becoming?