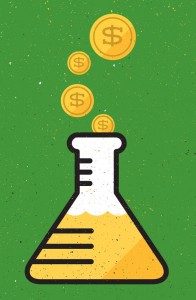 A couple days ago I pointed out the upside of Burger King’s acquisition of Tim Hortons: namely, how all the moving-to-Canada tax savings will obviously translate to higher salaries for Whopper workers.

Corporations don’t raise wages for workers unless they’re forced to. Especially fast food corporations. And that’s one reason higher minimum wages are important: it’s a good way to force big businesses to pay their workers enough money to have some kind of a life.

Conveniently, Prairie Dog’s Official American, Paul Constant, just so happens to have a story on raising the minimum wages in the current issue. Paul lives in (future NHL city) Seattle, which has committed to raising its minimum wage to $15/hour. It’s a bold move. It’s unusual, because this is happening at the city (rather than state) level. It’s really, really interesting, no matter what city or country you live in.

as a Seattleite, I’m proudest of the minimum wage increase because it addresses what I consider to be the single biggest problem of our time — rampant income inequality. One of my favorite thinkers on this subject is Robert Reich, a former Secretary of Labor under President Bill Clinton. In his books Aftershock and Beyond Outrage (and, in a more simplistic way, in the documentary Inequality for All), Reich explains that the American economy is stagnating because more and more money rises to the top one per cent of all earners and simply stays there. The wealthiest of us all now make more money than they can ever possibly spend, Reich explains, and that top one per cent is now in possession of a larger percentage of money than at any time since the 1920s. The Mitt Romneys of the nation instead invest their wealth in tax-free offshore accounts and nations like China, where pesky regulations don’t get in the way of sky-high profits. A capitalist society requires a free flow of cash, but the middle and lower classes in America now have less money to spend than they’ve had in a century, and this could lead us to another Great Recession. Reich’s prescription for this problem is heavily increased taxes on the top wage earners in America, which would then be funneled back to the middle and lower classes.

That idea was not popular, because as John Steinbeck once famously said, “socialism never took root in America because the poor see themselves not as an exposed proletariat but as temporarily embarrassed millionaires.” Even people below the poverty line hate the idea of raising taxes on the top one per cent of all earners because they suspect they are one lottery ticket away from joining the one per cent; here in Washington state, a vast majority of voters — 64 percent of us! — shot down a proposed state income tax on individuals earning more than $200,000 a year. Because that could be us one day, right? Rags to riches is the American dream, even if it never, ever happens in real life.

It’s a good story and with this week’s big merger, even more timely than expected (we scheduled it when we did because Labour Day seems like the obvious fit). Go read it, and leave a comment if you like.