Over the lunch hour I picked up a copy of one of the ugliest advertising flyer/brochure things I’ve ever seen. It has a tacky Photoshop spray-can pattern. The typography is cliched, clueless and stupid. There’s an incoherent film strip doohickey that serves no purpose. And this thing’s pink. And not even a NICE pink.

The whole package is a design calamity. It is, in one all-caps word, UNPROFESSIONAL. Every business that bought an ad in this eyeball-searing monstrosity has a right (and, I’ll argue, an obligation) to complain to the crapulent barbarians who crammed this pink turd through whatever 15-year-old desktop publishing software is popular with visigoths these days.

(Publisher Morash says the company perpetrating this graphic infraction, Steedman Publications, has been publishing ’em for years. He also said I should ignore it and do some actual work. Ha ha, Terry’s funny.) 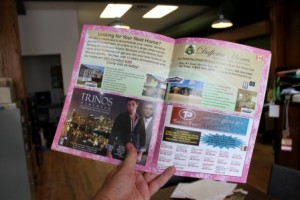 I realize that every city has free advertising brochures for tourists and residents. I have no beef with the format — they’re handy guides to local businesses. But come on, Regina–professional design is important and this amateur-hour crap makes our city look really bad. This isn’t something we want to put in front of tourists and new residents who have heard Saskatchewan is now a place to be.

There are Regina companies that produce excellent design. This firm,  for instance, is fantastic. There’s also this firm and this firm. And there are independent freelancers out there who are pretty good, too (although  there are also terrible ones, so be careful). And if you want to go out of province? How about these guys? They rock all the casbahs.

Good design is important. Bad design makes Regina look like a stupid place full of no-taste imbeciles. We’re better than that. So have some pride, Regina businesses, and don’t work with clueless morlocks.

I guess it isn’t surprising how often prairie dog sales reps have heard this line over the years. It happened again this week — a new client booked a campaign, read prairie dog for apparently the first time and promptly cancelled his ads, giving as his reason the sentence in this post’s headline.

It’s so weird when Regina business owners and organizations won’t do business with companies with different political views*. They should base their print/web marketing decisions on readership, not politics**. And lots of people read prairie dog — thousands and thousands. Business owners want prairie dog‘s awesome readers to see their ad and think about their products. Don’t they?

It’s too bad some of them have apparently confused “advertising” with “a kickback to newspapers that write favourably about whatever nonsense I believe”.

*The  guy our sales guy talked to wasn’t specific so I don’t know what “left-wing” means to him. Conway? Suzuki? My editorial about my aunt who voted for Barack Obama? I know, it was probably the Metric cover feature. Either that or Dan MacRae’s Bonus Column on the NHL lockout. Damn unionized hockey players!

**If you own a business and want to advertise just because you think we’re awesome that’s okay too.

Commentator Anonymous writes this after my Six In The Morning post on the controversial NDP ad:

Oh Gormley, how I love to hate you. You too, L-P and S-P (essentially the same newspaper). Anyway, the topic at hand is kind of funny, because the point of the ad was that the Sask Party are Union-Busting Assholes. Can’t refute that! Have to attack the editing of the ad instead! Gormley and the fun people who call into his show talk about “how things work in the Real World” and how that is so much different than how things work for people who work for the government and under unions. And this line of attack seems to resonate with people for some reason. Instead of saying, “gee I wish I was in a union”, people say “I hate those unions!” Well, not all people. But enough to make me scratch my head.

Commentator Anonymous is right. I finally listened to the NDP ad and I understand how, in the context of what it’s trying to say, the premise is legitimate. But the ad itself fails.

Here’s the problem: the ad makes a leap that expects too much from listeners. The NDP is attempting to make the case that the Saskatchewan Party government’s hostility to unionized workers is inherently hostility to Saskatchewan families. It’s a good case and the NDP would be wise to press it politically.

The problem is it’s too big a stretch — the NDP’s case is not yet established with most people. Regular voters don’t have “attacks on unions = attacks on regular people with jobs” hard-wired into their brains.

So it’s pretty damn unlikely that most listeners will buy Wall’s specific, anti-union quote as a general example of family-bashing — if they did make that connection, we wouldn’t have a Sask Party government, right?

Most people just don’t see unions as synonymous with families. So to most listeners, the ad can only seem like an example of the use of an out-of-context quote for an underhanded attack on Premier Brad Wall.

That’s why the ad is a failure. But it’s not unfair. It’s just bungled.

Here’s an example of what unfair political ads actually look like, from last year’s U.S. midterm elections. The politician in question is Alan Grayson, a good, feisty Democrat, whose campaign’s flagrant abuse of out-of-context quotes in an attack ad help cost him his seat. This is different than the NDP’s mistake. Grayson’s people were slimy. The NDP just screwed up.

Although like Grayson, they’re standing by their ad. We’ll see how that works for them.

There’s a new viral marketing campaign that’s funny. Here’s the video. Here’s the link to the article for after you watch the video. Some language might get you in trouble with your boss, so use headphones if you’re at work.