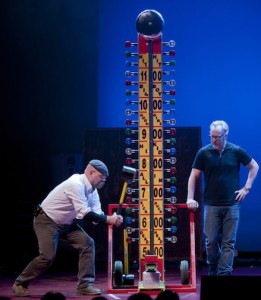 In the current edition of Prairie Dog we ran an interview with MythBusters host, Adam Savage. But as things usually go, there wasn’t enough space in the paper to print the entire thing.

So, here is a complete transcript of our conversation…

Prairie Dog: How do you feel about Mythbusters becoming this big phenomenom?

Adam Savage: It’s funny, every time I’m asked about that I just want to quote Rilke from Letters To A Young Poet. In that he says, it’s vital that you remain ignorant of your best qualities. You know, the fact is the ways in which MythBusters has become successful, almost none of them were ways in which we intended. All I set out to do at the beginning — and it’s not… MythBusters wasn’t our idea — but all I set out to understand at the beginning was how we’re telling a story. And over the years, the different ways in which people reached out to us and explained the significance of the show to us – whether it’s a PhD graduate student telling us that he got into the field because of MythBusters or people describing that we’re at the intersection of critical thinking or that we got their autistic child interested in science — the ways in which MythBusters has been demonstrated to us to be significant to people, the way we deal with it is by merely taking that seriously but still doing our very best when we’re shooting the show to remain true to what we think of as the cause, which is our enthusiasms and our curiosity.