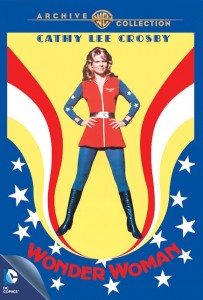 I was looking at the upcoming Warner Archives DVD Collection, Warner Brothers burn on demand DVD and soon Blu-ray service that offers stuff that would never, ever see the light of day and came across this.

Apparently in 1974 Warner had a made for TV movie where they tried to bring Wonder Woman to life. Here’s their press release.

Before Lynda Carter took the heroine back to World War 2 for her “New, Original” incarnation in 1975, statuesque tennis pro-turned-performer Cathy Lee Crosby swung the magic lasso in a very different TV incarnation of Wonder Woman… seemingly influenced by her recent turn as a mod, cat-suited crime-fighter in the pages of her DC Comics home, this Amazon Princess was more superspy than superhero.

Still, many of the expected wondrous elements from bracelets and lassos to Paradise Island and invisible jets all make an appearance, albeit with a sleek, seventies espionage super-action refit. Three years before taking up residence on Fantasy Island, Ricardo Montalban plays laconic lothario Abner Smith, who lurks at the top of the conspiracy to make off with ultra-secret code books – leading Agent Prince to discover an Amazon sister-in-exile (Anitra Ford).

That’s right Cathy Lee Crosby was Wonder Woman a year before Lynda Carter and wore a completely different costume. One that doesn’t exactly look like the classic super-hero costume, or even a costume. Also this Wonder Woman didn’t have any super powers, invisible jet or a lasso and she worked as secret agent for the U.S. fighting the evil Ricardo Montalban. The show did well but not great so Warner tried again the following year with Lynda Carter in the lead role in a TV movie called The New Original Wonder Woman. This one was set in WWII and was closer to the comic books in costume and powers. This lead to a first season TV show and then a second were the show was set in modern times. But it all started with Warner Brothers yet again missing the point of their superhero properties.