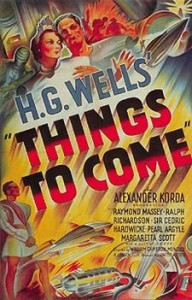 The Criterion Collection has just released the classic science fiction film Things to Come on Blu-ray. Based on H.G. Wells’ The Shape of Things to Come and written by Wells the film is notoriously known for predicting WW II.

Wells wrote the screenplay in 1935 and legendary film producer Alexander Korda (The Thief of Bagdad) made the film. The story is set in the fictional British town Everytown where in 1940 Britain is attacked by an enemy who uses planes to bomb the town. Soon the whole world has been thrown into war. By 1966 the fighting has gone on so long that a plague has started wiping out people. In 1970 the world has regressed to different tribes of people. A technologically advanced group of people called Wings Over the World has started taking over the world. The film moves throughout time towards the year 2036.

There were multiple cuts to this film. It started out 130 minutes and was edited down to 117 then 108 minutes. The U.S. release was at 96 minutes. After that more cuts came and the run time was cut to 92 minutes. Most of the cut footage has been lost. A few random scenes have been found over time and the recent Criterion edition runs at 96 minutes.

Wells’s original screenplay was published as book before the film was released and contains several scenes that aren’t in the film. Besides Wells’ uncanny prediction about the impending war his vision of the future also included giant TV screens in public, not groundbreaking but still kind of cool. Wells hated Fritz Lang’s Metropolis and wanted this film to be the opposite of it.

This film has fallen into public domain in the U.S. but not in the U.K. so it’s all over the net and in discount DVD cheap bins. The Criterion edition is a newly restored edition and it looks fantastic.