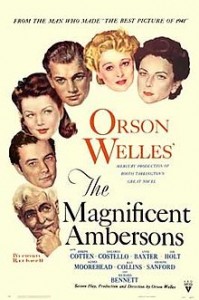 While it has been available on DVD in other countries, Warner Brothers has finally released The Magnificent Ambersons (1942) on DVD in North America but only if you buy the new Blu-ray set of Citizen Kane. They will probably release the film later separately.

The film is notorious for what the studios did to Orson Welles after he finished filming his adaptation of the Booth Tarkington novel. RKO freaked when they saw Welles’ film and recut the movie and removed about an hour worth of footage and tacking on a happy ending. The footage that was removed has been lost ever since. I assume that Warner Brothers has been hoping to locate the footage before they bother giving the film a real restoration. But even a cut up bastardized version of The Magnificent Ambersons is better than nothing. For now.