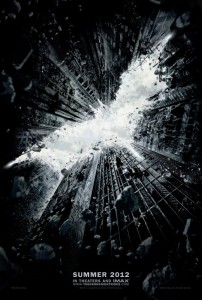 On July 20th when The Dark Knight Rises opens nationwide we will be getting the movie at the Kramer IMAX as well as the usual movie theatres.

This is awesome news. Director Christopher Nolan is a fan of IMAX and shot the movie using the official bigger and bulkier IMAX cameras, even breaking one during an action scene. Advance tickets go on sale Monday, June 11 at 10:00 a.m. The Thursday night midnight show won`t have any pre-sale tickets.

Group rates do not apply for this film. Maximum of 10 tickets per person for advance sales.

In person: visit us at 2903 Powerhouse Drive any time we are open. Hours of operation »

Nolan directed The Dark Knight Rises from a screenplay he wrote with Jonathan Nolan, story by Christopher Nolan & David S. Goyer. The film is produced by Emma Thomas, Christopher Nolan and Charles Roven, who previously teamed on Batman Begins and the record-breaking blockbuster The Dark Knight. Benjamin Melniker, Michael E. Uslan, Kevin De La Noy and Thomas Tull are the executive producers, with Jordan Goldberg serving as co-producer. The Dark Knight Rises is based upon characters appearing in comic books published by DC Comics. Batman created by Bob Kane.

The Dark Knight Rises will be distributed worldwide by Warner Bros. Pictures, a Warner Bros. Entertainment Company. The prologue has been rated PG-13 by the MPAA for “some violence.”

The Dark Knight Rises: The IMAX Experience will feature footage filmed with IMAX cameras. The IMAX release will be digitally re-mastered into the image and sound quality of The IMAX Experience with proprietary IMAX DMR (Digital Re-mastering) technology. The crystal-clear images coupled with IMAX’s customized theatre geometry and powerful digital audio create a unique environment that will make you feel as if you are in the movie.

Note: the schedule below begins July 20.