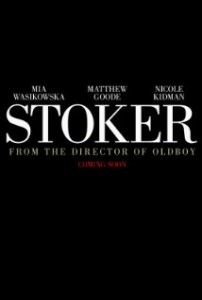 This will the last Sunday Matinee post for a while. Starting tomorrow and for the month of October, it’s the annual 31 Days of Horror. 31 days straight of movies that will terrify, horrify and entertain. In honour of this tradition, here’s a sneak preview.

Brilliant Korean director Chan-wook Park (Sympathy for Mr. Vengeance, Oldboy, Sympathy for Lady Vengeance, Thirst) has made his first English language film. It’s called Stoker and it stars Mia Wasikowska, Nicole Kidman and Matthew Goode. The first trailer has been released and it looks awesome. A nice creepy unsettling trailer with Nicole Kidman as the mother of Mia Wasikowska. Wasikowska’s father has died and Uncle Charlie (Matthew Goode) has come to stay with them. I’m usually leery when foreign filmmakers make their Hollywood debut. Their films are never as good as the movies that made their careers. But this trailer looks promising, but then trailers are suppose to make movies look good no matter what. Still, here’s hoping that Park can make a great film in Hollywood.