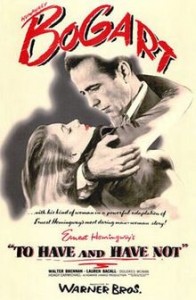 Lauren Bacall passed away August 12th at the age of 89. Bacall had starred in some awesome classic films over the years and surprisingly I haven’t really ever gotten around to writing about them. Well here’s a couple of my favourites.

Bacall’s first starring role defined her life and her career. She was cast opposite in Howard Hawks’ adaptation of what Hawk’s considered Ernest Hemingway’s worst novel, To Have and Have Not in 1944. Hawks and Hemingway worked on the screenplay and changed the story greatly. The final result owed a little more to Humphrey Bogart’s previous hit Casablanca than Hemingway’s novel. Still it’s a fun film.

Bogart stars as an American living in Martinique during WWII. Bogart is hired by French resistance to help smuggle a couple of people into the country. He needs the cash so he agrees. Meanwhile Bogart meets Bacall who is traveling around and is now stuck in Martinique because she has run out of cash. Walter Brennan plays Bogart’s drunken buddy Eddie and Dan Seymour is the evil French Vichy police captain out to catch the French rebels. To Have and Have Not featured the famous flirting scene “You know how to whistle, don’t you, Steve? You just put your lips together and… blow”. The film itself is also memorable for introducing Bogart to Bacall who both fell in love and married a year after this film was released. They stayed married until Bogart died of cancer in 1957.

The next film Bogart and Bacall starred in was the classic 1946 film noir The Big Sleep also directed by Howard Hawks. Bogart plays private detective Philip Marlowe who has been hired by wealthy General Sternwood to resolve some gambling debts of the general’s youngest daughter Carmen (Martha Vickers). Bacall plays the older daughter Vivian. Everyone thinks that the general hired Bogart to look into a missing person’s case. Before you know it, there’s dead bodies, murder, blackmail and mayhem.

The movie is fantastic. It was made during the end of WWII but it was held back so Warner could release a glut of war time pictures. With the war ending Warner was afraid people would get sick of war movies. The original 1945 cut of the film featured less Bogart and Bacall and a more coherent plot but a slower pace. For the 1946 cut the studio decided to beef up the Bogart and Bacall quotient which made the movie faster paced but made the plot a little more confusing but it’s a more superior film overall.