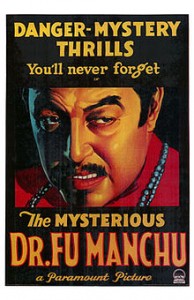 With the influx of superhero movies besieging movie theatres for the next several years I thought it might be a good time to look at the history of comic book movies. Some of them I have touched on in previous Sunday Matinees but over the next several Sundays I going go over the birth of the genre.

Before I start with the superheroes I figured I start with the influences that helped shape superhero comics. And before there were heroes there were the villains. Superheroes didn’t start showing in comics until the late 1930’s but they were influenced by several literary characters, mostly pulps. Characters like Sherlock Holmes, Tarzan, The Shadow and Doc Savage would lead the way for the heroes but the villains started with 1911’s Fantomas, a series of French novels about an unstoppable master of crime. I wrote about him and his films with my first Sunday Matinee.

Fantomas would set the stage for one of the most racist and influential super-villains of all time, Sax Rohmer’s Dr. Fu Manchu. Fu Manchu first appeared in Rohmer’s 1913 novel The Mystery of Dr. Fu Manchu. I wrote about the novel back on prairie dog’s old site and discussed how I felt the only way tackle the material is to root for Fu Manchu. Rohmer’s racism and misogyny throughout his novels is extremely contradictory. There’s no mistaking the racism but then Rohmer made Fu Manchu the most noblest of the characters in the novels. Sure he was trying to kill and take over the world but when he maimed an innocent bystander Fu Manchu would save him from the poison – it was meant for Nayland Smith after all.

The basic plot of the novels has Dr. Fu Manchu plotting something nefarious against the Western world. Fu Manchu belongs to an evil organization called Si-Fan and he uses it to try and take over the world by using his small army of assassins and his dislike for guns allows him to use such methods like strangling, snakes, spiders, fungi, poisons, death traps and femme fatales. Fu Manchu is usually stopped by British police office and Sherlock Holmes knock-off Nayland Smith and Smith’s assistant and sidekick Dr. Petrie. Fu Manchu is smarter than Smith and Petrie so he’s usually foiled by being betrayed by one of his own agents, the first couple of books it was the exotic and enchanting Kâramanèh who falls in love with Petrie. There was 13 novels in the series and Fu Manchu first appeared on the screen in the 1923 silent serial The Mystery of Dr. Fu Manchu with Harry Agar Lyons playing Fu Manchu but without his trademark moustache that is so synonymous with the character that the style of moustache is named after him. A sequel quickly followed in 1924.

In 1929 Warner Oland took over the role in The Mysterious Dr. Fu Manchu. Here the filmmakers tried to make Fu Manchu a little more sympathetic by building a back story where Fu Manchu was a humanitarian until his wife and daughter were killed during the Boxer Revolution and he swears revenge against the white people involved. Oland would star in two sequels The Return of Fu Manchu (1930) and Daughter of the Dragon (1931). In 1932 Boris Karloff would take over in The Mask of Fu Manchu with future Thin Man star Myrna Loy as his evil daughter. A serial Drums of Fu Manchu was made in 1940. By the time WWII started the studios were asked not to make anymore films because China was an ally in the war.

After the war the was a TV series made in 1956. Then Christopher Lee took on the role for five movies starting with 1965’s The Face of Fu Manchu. Fu Manchu’s last official appearance was in the comedian The Fiendish Plot of Fu Manchu starring Peter Sellers in his last role before his death.

In the 1931-1933 there was a comic strip featuring Fu Manchu then the character made the leap to comic books. Before Batman appeared in Detective Comics for the first time, Fu Manchu was already co-starring in them. In fact the first appearance of Batman in issue #27 had Fu Manchu appearing in his own back up story in the issue. There was more comics in the 1950s and then Marvel had the rights in the 1970’s where they jumped on the kung fu craze and created Master of Kung Fu starring Shang Chi. Shang Chi is a Marvel superhero but his father is Dr. Fu Manchu, over the next 100 issues Shang Chi fought to thwart his father. Marvel no longer has the rights to Dr. Fu Manchu bought they own Shang Chi so they can no longer mention who Shang Chi’s father really is.

The influence of Fu Manchu is enormous. Flash Gordon’s archenemy Ming the Merciless is an obvious knock off. Along with James Bond’s Dr. No, Batman’s Ra’s Al Ghul, Wonder Woman villain Egg Fu, Yellow Claw and Iron Man villain The Mandarin from Marvel Comics and Lo-Pan from the film Big Trouble in Little China, the list goes on and on. Even villains like Lex Luther owe Fu Manchu for his influence. The character is racist and part of the Yellow Peril propaganda but he is the prototype evil villain and his influence will be felt in genre films for years to come.