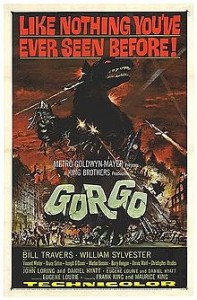 “Spewed up from the bottomless depths by a volcanic eruption that reached back 2,000,000 years in time to give the world one horrifying glimpse of a species we had thought extinct.”

In honour of Saint Patrick’s Day here is the world’s only giant Irish monster, Gorgo. Made in 1961 Gorgo was directed by Eugène Lourié. Lourié was best known as an art director but he did direct a few movies. His first was the Ray Harryhausen classic The Beast from 20,000 Fathoms. He also made The Colossus of New York and Behemoth the Sea Monster before he directed his last film Gorgo.The movie starts off the coast of Ireland where a salvage crew is trying to make a few bucks. While trying to salvage a sunken boat a volcano erupts underwater causing a massive wave which damages the ship. The crew lead by Bill Travers and William Sylvester head to the nearest port to resupply the damaged ship. When they get close to shore there are several dead weird looking fish laying in the water. Once on land they discover the harbour master has been salvaging the ocean for treasure. They follow his crew out the next day where two of the divers turn up dead. That night a giant sea monsters attacks the island. It’s scared off with fire but Travers and Sylvester decided tocapture it. They succeed and quickly sell it to the highest bidder, a circus in London that puts the beast on display despite the protests of young Irish boy and the University of Dublin.

They discover too late that Gorgo is just a baby–and Mama is looking for her baby.

Gorgo is cheesy fun that ends on a happy note for the monsters for once. After using stop motion animation for his last three giant monster movies Lourié and the production company decided to use a rubber suit instead. They tried hard but it still looks like a guy in a rubber suit.

The movie inspired Charlton Comics to make 23 comics based on the film, several of them drawn by the legendary Steve Ditko (the guy who created Spider-Man) and on March 19 VCI is releasing the film on Blu ray, not to shabby for a British knock-off of Godzilla.