Sunday Matinee: Elevator To The Gallows 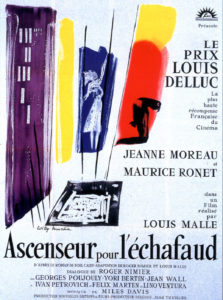 Julien leaves his still running car and runs back into the building taking the elevator. The caretaker around the same moment turns off the power to the elevator trapping Julien. Then young lovers steal Julien’s running car. Florence sees Julien’s car drive past with a young woman in it thinking that Julien has run off with another woman. Julien meanwhile is still trapped in the elevator.

The young couple end up going to a motel where they sign in under Julien’s name and buddy up to another couple. Then things go wrong for everyone.

This was director Louis Malle’s first feature film and helped kick start the French New Wave movement. The movie itself owes to elements of Film Noir. It’s dark and shadowy with a cool grittiness. Miles Davis created the film score. I love this movie, everything goes wrong the minute that Julien is trapped in the elevator. Criterion is releasing the movie on blu-ray in February and its definitely well worth watching. Brilliant cinema.