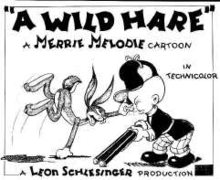 I used to do a little weekly post called Saturday Morning Cartoons for prairie dog. Every Saturday featured a throwback to an old Saturday morning cartoon. The post ran for a couple of years and everything from the classics to the obscure was covered. But I never did Bugs Bunny.

Bugs Bunny just officially turned 75 on July 27. He’s one of the few licensed characters that I can think of that doesn’t have a single creator. Bugs was organically created by several animators working at Warner Brothers. Animators like Ben “Bugs” Hardaway, Cal Dalton, Tex Avery (who gave Bugs his catch phrase), Bob Clampett, Friz Freleng, Chuck Jones and Robert McKimson. And of course there wouldn’t have a Bugs without Mel Blanc voicing him.

An earlier version of him first appeared in Porky’s Hare Hunt in 1938. A similar non-talking version appeared next in 1939 in Prest-O Change-O. A third appearance in 1939 also happened in Hare-um Scare-um but again it’s just not quite the Bugs that people know. He gets a little closer in 1940 with Elmer’s Candid Camera but it’s in his official first appearance in 1940 with A Wild Hare that he finally utters his immortal catch phrase “What’s up Doc?”