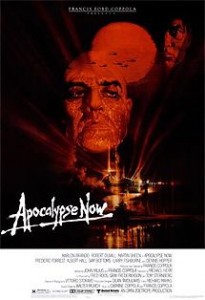 Man there’s a lot of classic movies celebrating anniversaries this year. And the film that broke Francis Ford Coppola mentally and financially is celebrating it’s 35th anniversary this year.

Coppola started work on Apocalypse Now a then modern adaptation of Joseph Conrad’s Heart of Darkness in the early 1970’s, he didn’t start production until 1976. Filming continued until 1977. It would take another couple of years just to edit the movie. It was finally released to theatres August 15, 1979.

The film is set during the Vietnam War. Martin Sheen is Captain Willard a man looking for an assignment. He gets one. He has go down a river in Vietnam, find Colonel Kurtz (Marlon Brando) and kill him. The Colonel it seems has lost it and is operating without orders and doing who knows what. Sheen and a small group of soldiers take a boat down the river. Along the way they encounter weirder and weirder situations. Surfing cavalry helicopter pilots (Robert Duvall), Playboy bunnies and an outpost that doesn’t have a commander but that doesn’t stop the chaotic fighting.

Eventually they reach Kurtz’s compound where they’re greeted by American photojournalist Dennis Hopper. From there Sheen has to decide what to do next. Coppola himself had trouble writing the ending. What he comes up with works brilliantly. The film suffered a ton of trouble while Coppola was making it, the troubles are documented in the excellent documentary Hearts of Darkness: A Filmmaker’s Apocalypse.

In 2001 Coppola re-edited the movie adding an addition 49 minutes including a long scene involving a French rubber plantation that adds some interesting ideas to the proceedings but really stops the movie’s momentum. One of the more brilliant scenes added back in is a scene with Sheen stealing Duvall’s surfboard causing Duvall to hunt after them. I love this movie, it gets better ever time I see it. It won the Palme d’Or in 1979 which it shared with The Tin Drum and is on several greatest movie lists. It’s one of those movies that I always assume everyone has seen and am shocked when I run into someone who hasn’t. It’s a masterpiece of cinema.