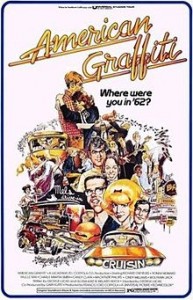 Since I was a kid every year, without fail, my father always takes my brother and I to the Regina Majestics Car Show. So in honour of the Majestics this weekend today’s Sunday Matinee is George Lucas’ 1973 car cruising classic.

American Graffiti is about one last cruise night for a group of graduated high schoolers in the year 1962. The film follows multiple storylines as the night progresses. Drag races, searching for the perfect girl, trying to decide what to do with one’s life are just some of the many stories  that the movie tells. The cast featured Richard Dreyfuss, Ron Howard, Paul Le Mat, Harrison Ford, Charles Martin Smith, Cindy Williams, Candy Clark, Mackenzie Phillips and Wolfman Jack.

It was Lucas’ second movie and he had a bitch of time convincing studios to let him make the film. At this point in his career Lucas had only made THX 1138 which wasn’t a hit. Eventually George Lucas’ buddy Francis Ford Coppola stepped in and produced the film. They even had to fight to get the original rock n’ roll music into the film. The studio just wanted to use a cover band, it was cheaper that way. The movie was a huge hit and eventually paved the path for Lucas to make Star Wars and go mad with power.

The film introduced Harrison Ford to Lucas who cast him in Star Wars and launched his career. Ron Howard even worked with Lucas again but as a director, making the mediocre fantasy film Willow. But in the early 1970’s there was a brief period of time when George Lucas could tell a simple human story without a ton of special effects.