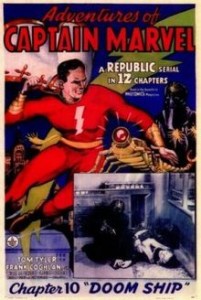 In 1941 Republic Pictures brought the first superhero comic book character to the big screen. Adventures of Captain Marvel brought Fawcett Comics’ most famous superhero to life after an earlier attempt by the studio to bring Superman to the big screen failed.

Hailed as one of the greatest movie serials of all time, Captain Marvel was also one the best selling comics at the time, surpassing Superman in sales. In 1941 DC Comics tried to sue for copyright infringement but initially lost. The case had lasted 12 years and by the time it was over it was the mid-1950’s, superhero comics had lost their luster and sales were in the toilet. DC had appealed the original ruling and Fawcett Comics lost. They decided to settle with DC and stopped making comics. In 1972 DC bought the rights to Captain Marvel and now sporadically use the character alongside of Superman.

The serial featured a loose origin for Captain Marvel. Young Billy Batson (Frank Coghlan Jr.) is an assistant radio operator working on a historical archeological dig in Siam. The dig team discovers a golden scorpion idol that an evil hooded villain known only as The Scorpion wants to use so he can rule the world with a death ray. (The idol also is a death ray.) Batson discovers a secret room where the ancient wizard SHAZAM empowers Billy to save the world by transforming him into Captain Marvel (Tom Tyler) when he utters the words SHAZAM!

The flying stunts are well done. A few years later Columbia Pictures made a Superman serial but used hand drawn animation to have hm fly. Of course Superman never flew in the comics until late 1941 when the Fleischer Studios animated a series of shorts for DC and got tried of trying to draw him leaping over tall buildings in a single bound.