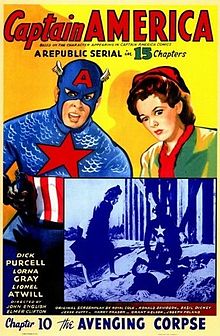 ekend The Avengers opened to massive amounts of money. The first character to hit the big screen from Marvel was Captain America in 1944 in the form of a serial. It varied greatly from the comics. Dick Purcell starred as District Attorney Grant Gardner aka Captain America. He didn’t have a shield just a gun but it was Republic Pictures most expensive serial they had made at the time.

Unlike DC Comics another Marvel character wouldn’t grace the big screen until 1986 when Howard the Duck bombed for George Lucas.