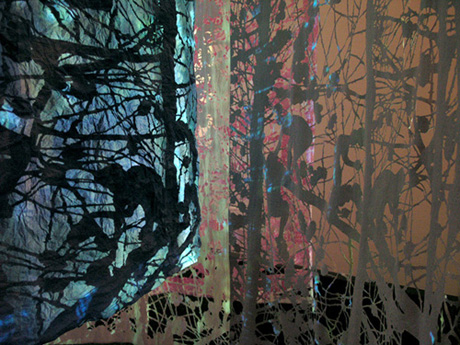 I wandered over to Central Library tonight to check out Toronto artist Ed Pien’s  fantastic new show Haven of Delight (pictured at left). Before I hit the Dunlop Art Gallery I picked out some DVDs upstairs and checked them out, then took a quick browse through the Science Fiction section on the library’s north side.

When I got to the end of the row, I noticed three plastic bins lined up on one of the reading tables. Running along the window were four or five smaller containers. I stopped to listen. There was no water dripping from the ceiling. And when I checked, the containers  were dry. So maybe they’d just been tossed there? But today was pretty cold. So if the roof had been leaking, it likely didn’t today.

The sorry state of cultural infrastructure in Regina is a big bugaboo for me. While sports and recreation facilities are funded up the wazoo, arts and culture groups in the public sphere are forced to eke out an existence in antiquated and grossly inadequate facilities that are literally crumbling around them. Central Library “celebrates” it’s 50th anniversary next year. Plans are in the works (sort of, although progress to this point has been painfully slow) to provide much needed mechanical upgrades and expanded program capability. So to see what was up I checked with a library employee I know, and they said that yeah, the library roof had been leaking.

I don’t remember seeing the basins before, so I don’t know if this is a long-standing problem, or if it just started this spring. Either way, it would seem to indicate that Central Library is in desperate need of civic investment.