Something To Look Forward To 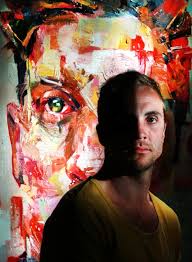 In a June profile by Maclean’s magazine he was compared to the late British artist Lucian Freud for the psychological intensity of his portraits and self-portraits which explore masculinity from his perspective as a gay male.

Salgado has enjoyed a remarkable run of sold-out shows in London, New York and other locales, and in October he’ll be returning to Regina to have a show at the Art Gallery of Regina called The Acquaintance.

Salgado had originally been scheduled to show at the AGR last winter but suffered a broken arm which disrupted his ability to make art. But he’s back in the studio now and his exhibition will definitely be a highlight of the fall arts season in Regina.

The show, which is curated by AGR director Karen Schoonover, opens on Oct. 9 and runs until Nov. 23.