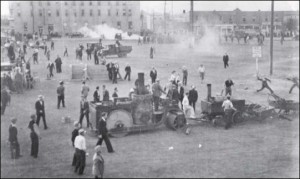 Saskatchewan’s Crop Insurance Corporation (SCIC) is a support agency operating within our agrarian economy. SCIC workers have been without a contract since September of ’09. Truly, an unfortunate situation. SGEU’s requested 7.75 per cent raise has received a counter offer of 5.5 per cent. Both sides have indicated a willingness to return to the table. However, in the midst of a catastrophic flood — SCIC workers walked off the job. According to some, the timing is a well-placed political maneuver. But strikes don’t take place in a vacuum and the province’s farmers will suffer. The SCIC developed as a stabilizing agent in a n unpredictable industry. It is meant to help farners through tough times, not hang them out to dry.

This evening, I will be taking part in a guided tour commemorating the “On to Ottawa” trek and Regina riot. I believe in the need for strong unions, but I also believe a debt of accountability is due. Early union leaders and workers took to the streets in the name of safety, security and solidarity. The cry for “OBU” (one big union) considered the needs of all the people searching for respite. Pioneering organizers like J.S. Woodsworth and his American counter-part Eugene V. Debs demanded that no worker be left behind. The SCIC strike and CUPW lockout have done little to remind us of the “solidarity-ideal”. The people suffering are the unprotected workers, farmers and others overlooked by the existing hierarchy.