Six In The Morning: Pharyngula On Strike, Monckton On Rampage, Ghostbusters Dead

1. SCIENCEBLOG BREAKDOWN: Three of the blogs that are in my daily newsloop are Pharyngula, Deltoid and A Few Things Ill Considered. All are part of the Scienceblogs community. Recently, the Seed Media Group — which runs Scienceblogs — sold PepsiCo a blog that was supposed to be about food science. Naturally, the scientists on Scienceblogs were a little miffed that their community’s reputation as a source for reliable science news was being sold to a corporation that would use the space to promote its own business interests. Really good blogs (like Good Math Bad Math and A Blog Around The Clock) shut down in protest. Many others threatened to do the same. One blogger reports in the Guardian that this isn’t the first time that Seed Media has compromised editorial independence to suck up to an advertiser. And now, to make matters worse, Pharyngula blogger, PZ Myers, has gone on strike. And that sucks because Pharyngula is a very good blog and a very good source for science news (and for atheistic, anti-pseudo-science ranting… it’s also a good place for cephalopod pics… if that floats your boat). Scienceblogs was a very good site but Pharyngula was it’s biggest draw and if it moves elsewhere, Seed Media will probably go under. (various scienceblog sites)

2. STEVE SCHNEIDER R.I.P.: Renowned climate scientists and author of Science as a Contact Sport, passed away this morning. (RealClimate)

3. MONCKTON CAN DISH IT OUT, CANNOT TAKE IT: Proving his total lack of interest in a real and honest debate on climate science, the clown prince of climate denial, Christopher Monckton, has been trying to shut down John Abraham’s devastating critique of his views on global warming. Sites have gone up to show their support for Abraham. And Abraham’s university, St Thomas, has come to his defense in a big way — their lawyers have informed Monckton that Abrahams has done nothing improper, and they’ve subtly threatened to sue the mad Viscount if he doesn’t quit slandering the university. And if you’re wondering why I’m still going on about Lord Monckton when he’s clearly a certifiable loon, well, I’ve explained that already. (Mind of Dan, St Thomas University, Hot Topic, Minnesota Post)

4. STATSCAN ANGRY: Officials within Stats Canada say Industry Minister Clement has been misrepresenting the advice they’ve given him. Clement is apparently saying he’s been reassured that StatsCan can get by with the changes his government is instituting. Not so, says StatsCan. Meanwhile, Tabatha Southey — on whom I’m totally crushy — as always sums the whole affair up nicely. One of many good lines…

It’s odd that just when so many of us have begun disclosing so much to so many, an anti-census movement has gained traction (it’s big with America’s Tea Party crowd). One possible solution is that we pass a law saying all Canadians have to Facebook-friend the new Governor-General. I assure you, the government will be begging you all for less information in no time.

Southey is without a doubt the Globe‘s best columnist. Just sayin’. (Globe and Mail) 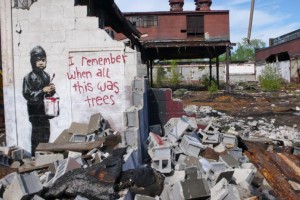 5. BANKSY ART MOVED: Famed street-artist Banksy tagged an abandoned autoplant in Detroit. The work has been moved and that pissed some people off. I’m only mentioning this to give me an excuse to put up some Banksy art. It’s awesome. (Boing Boing)

6. NO SERIOUSLY, NO GHOSTBUSTERS 3: Bill Murray has spoken. It’s in a really good interview in GQ. He also explains why he did Garfield and explains his love for Kung Fu Panda. Check it out.

UPDATE: Added in a video of Steve Schneider talking about the risks of global climate change from back in 1979.