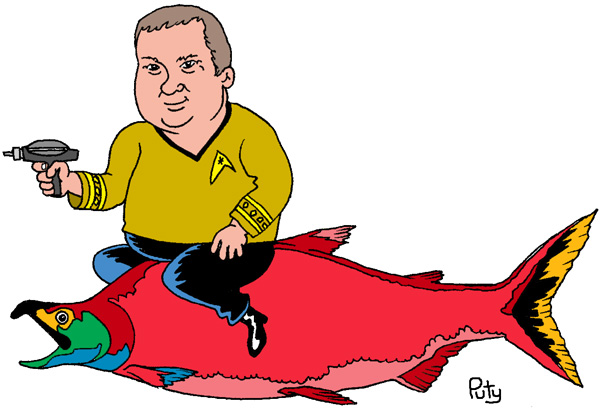 Collapsing populations of wild salmon in British Columbia have a new ally: Captain James T. Kirk. The Mighty Shat has loaned his photon-torpedo bright star power to an NDP private member’s bill that seeks to end the risk offshore salmon farms poses to the wild fish. From the Canadian Press/Globe And Mail:

Mr. Shatner joined Mr. Donnelly on a conference call Thursday in which he urged Canadians to prevent their precious resources from being destroyed.

“As a father and a grandfather [it’s my] wish that my offspring live to see the same things I did, the wildlife and the wilderness,” said Mr. Shatner, who dialed into the teleconference from Los Angeles.

Full story here. Naturally the salmon industry is all like, “maach glauch ruhh salmon cha!” which is Klingon for “we shall destroy the salmon-hugging sissies!” Yeah guys, whatever. We took you down at Archer IV, we’ll take you down here.

*Weirdly, there is also someone in the story named Ruth Salmon. Funny name for a Klingon!