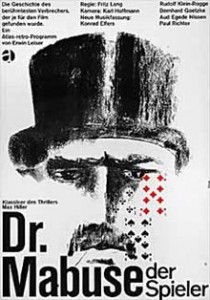 In 1922 Fritz Lang adapted Norbert Jacques’ Dr. Mabuse the Gambler into a 270 minute film. Inspired by other pulp villains like Dr. Fu Manchu and Fantomas – Mabuse is a respectable doctor by day and a fiendish criminal mastermind by night. He is bent on the destruction of the world so he can rule over the ashes. Mabuse is a master of disguise and a master of hypnosis which he uses to seduce women and cheat at poker.

The movie was broken into two parts. Part one titled Dr. Mabuse, the Gambler and part two titled An Image of the Times and Inferno, People of the Times. Mabuse was played by Rudolf Klein-Rogge who also played the mad scientist Rotwang in Fritz Lang’s Metropolis. Like all evil geniuses, Mabuse has a manifesto of crime. Unlike other pulp villains such Fantomas and Fu Manchu, Mabuse seems to cause his own downfall. The filmcombined the German Expressionist style with popular entertainment – creating an arty but fun mystery thriller.

11 years later Lang and company made a sound sequel called The Testament of Dr. Mabuse. Rudolf Klein-Rogge returned to play Mabuse who is now in a mental institute. Otto Wernicke reprises his Inspector Lohmann character from Lang’s M. The story has a mysterious group of criminals carrying out a series of crimes that look like the work of Mabuse despite the fact that he is catatonic and incarcerated. So who can be carrying out such nefarious plans?

This movie is even cooler than it’s predecessor. It’s dark and shadowy with a sense of doom that lurks around ever corner.

The movie was banned by the new Nazi Party that had just come to power in ’33. The newly formed Ministry of Enlightenment and Propaganda was headed by Joseph Goebbels. Goebbels banned the movie because it “showed that an extremely dedicated group of people are perfectly capable of overthrowing any state with violence”. This was Lang’s last collaboration with his wife Thea von Harbou. She had wrote most of Lang’s movies during the 1920’s but by 1933 – she had joined the Nazi Party. He divorced her and eventually left Germany (there are varying stories about how fast Lang left Germany). He wouldn’t make another Mabuse movie until almost the end of his career.

In 1960 he made The Thousand Eyes of Dr. Mabuse. It was Lang’s last film he directed and it started a series of Mabuse movies that were made in the 1960’s. Gert Fröbe (Goldfinger) plays Inspector Kras who is investigating a murder spree that seems to be caused by a gang lead by someone who believes that they are the reincarnation of Mabuse. It’s not the high note that one would end a long and brilliant career on but it is a fun film.