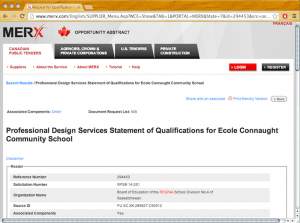 The Regina Public Board of Education is on the hunt for an architect to design a new Connaught School. And you can see the request for qualifications on the MERX site here.

If you or someone you know is an architect who doesn’t suck, you can even apply for the job. Though to be honest with you I am at present of the opinion that the deck is stacked very much in favour of P3A architecture (which is an architecture firm and does not refer to a P3 — ie, public-private partnership — procurement). I could be wrong. I’ve been wrong on lots of shit in the past. But I was tricked into doubting my gut and thinking for a minute that someone other than PCL would get the stadium contract, and sure enough my gut was right and PCL got the job.

Now, in response to a previous post, a commenter said she saw an article in which P3A claimed they aren’t in the running for the Connaught job. But I still haven’t found any such article and I looked pretty hard. So I’m not counting my gut out just yet and am putting my money on P3A.

Doesn’t really matter who gets the job anyway. Did you see the winners of the 2014 Governor General’s Award for architecture? Five fucking rectangles in five different colours. Jesusfuck. What is it with architects that they’re so obsessed with putting people into glass goddamn boxes?

If that’s the state of top-flight contemporary architecture, I don’t hold out any hope for the new Connaught being anything more than a glorified fucking crate.

5 thoughts on “School Board Looking For Connaught Architect”