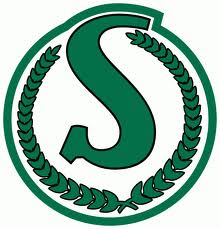 After a disastrous 2011 campaign that saw them miss the playoffs for the first time since 2001, the Riders underwent a major rebuild, hiring a new head coach (Corey Chamblin) and jettisoning a number of veteran players in a bid to upgrade the roster.

The Green & White reached the playoffs in 2012 with an 8-10 record, and definitely performed better than in 2011. But they proved to be maddeningly inconsistent, with stretches of games where they looked formidable, and others where they looked horrible.

In our first Rider Fan Forum of 2013 Cal Corduroy, Earl Camembert and Ron Mexico dissect some of the team’s off-season moves and look ahead to training camp which opens in Saskatoon in late May.

Were you surprised at the number of moves the Riders made in the off-season?

CC I was surprised, albeit pleasantly. The Riders did improve in 2012, but there were still many gaps to fill.

What are your thoughts on:

EC I’ve talked to a couple of people close to the Riders and they think signing Cortez is the greatest thing since sliced bread. I don’t know about that, but you can’t argue with the guy’s success in getting big production numbers out of his quarterbacks. No doubt a positive but if he got canned in Hamilton because he was a dink then less so.

CC Great. We haven’t had a decent offensive coordinator since Paul LaPolice. Maybe Cortez can get Darian Durant to the next level… no one else has been able to so far.

RM I’m a bit reserved given Cortez’s recent colossal failure as a head coach of a team thought to have a lot of talent. However, his record as an offensive coordinator has been good. So I should probably get over my skepticism.

(ii)  The loss of Craig Dickenson as special teams coach?

EC If the story that came out about why Dickenson left is true, that is, he didn’t want to report for duty a few months early and Chamblin took a stand, then I think that was ill advised. Who cares if the special teams coach gets here in January or March/April? I think there’s something else to that one.

CC Disappointed. Dickenson was a good coach. Seems a bit petty if he left for the reasons published, although I sort of understand Chamblin’s point.

RM If the reports are correct about his departure I’m disappointed in our head coach. I don’t think your special teams coordinator needs to be in town in February. He doesn’t even know who he will have to work with until the roster is set, based primarily on the players’ performance on offence and defence. This whole dispute seemed like a bit of a power struggle.

(iii)  The acquisition of Geroy Simon from B.C.?

EC It was a nice coup for the team. He won’t be the best receiver in the league, or the best receiver on the Riders for that matter. But his veteran presence has to be a plus. As I see it, there’s no down side to getting him. He might get hurt because of his age, but so what? He ran the B.C. locker room and I suspect he’ll be a big voice in the Riders’ locker room too.

CC Simon will be a plus both on and off the field. Lord knows he burnt the Riders enough. Maybe we can (for once) be the burners and not the “burnees”.

RM I found Regina’s reaction to the signing to be small town cheap. The signing of an old, past his prime, recently injured, coming off his worst season American receiver should not have been front page news here. As a football move, it was okay.

EC Dwight Anderson is the biggest asshole in the league, but he’s our asshole now. I heard that the first thing the team did after they got Simon was ask him who the best DB in the league was. His response, so the story goes, was Anderson. Odell Willis is a clown. He got lucky one year in Winnipeg, sort of like Fred Perry got lucky one year here and got a bunch of sacks. After that he stunk, and it was sayonara. Willis was invisible for two-thirds of last season. He wore a great hat though.

CC Anderson is a jerk, but he’s a tough back. I like the  signing, as long as the negatives (cheap penalties, scrapping with his own players, shooting off his mouth) can be held in check — by, say, Geroy Simon? Good riddance Odell. Lot of sizzle. Not a lot of steak.

RM We replaced one asshole with another in Willis and Anderson. Good riddance to Willis and his inconsistent play and timely penalties. I actually think that Weldon Brown will be the better acquisition at defensive back.

The signing of Rey Williams to play middle linebacker?
EC We’ll see what Williams has left. The Rider defence got way better when they got Joe Lobendahn, but his knee must look like a colander of spaghetti because lots of teams have passed on him. Williams is a year or two older, but he should still be able to play the position. Clearly, a net gain for the defence.

CC Better than his sister Shomari (or so it seemed at times).  Rey was third in the league in tackles last year, and it sounds like they got him for a reasonable price. Joe Lobendahn has a wonky knee and (apparently) a hefty price tag — neither of which Williams has.

RM I was surprised to learn that Rey Williams is older than Joe Loebendahn. I thought we were trying to get younger when we made this move, because Loebendahn was really good last year. This is alright. Williams is good.

In April the Riders held a mini-camp in Florida. Media reports suggested the coaches were cracking the whip as far as not tolerating mistakes from players. With the Riders set to host the 101st Grey Cup in late November do think the team is under intense pressure to perform well this season?

CC Absolutely. Despite this being Chamblin’s second season, I think the Rider fans are hoping for a Grey Cup berth. Anything less would be considered a disappointment.

RM I don’t think the Riders are ever under intense pressure to perform. People here are rabid fans, but for most of them, anything better than a .500 record is gravy.

Heading into training camp are there areas of the team that remain a concern?

CC Same as always — defensive line and quarterback. I think they have improved the D-Line, although time will tell as there was a long way to go.  Durant has to step it up, although I’ve been saying that for years.

Among the other seven CFL teams, is there anyone who stands out as having substantially improved in the off-season?

CC Toronto improved, as did Montreal quietly (despite losing their coach). B.C. will remain tough. Riders made the most improvements in the off season, I would say. I suppose Winnipeg did okay picking up a few Rider “also-rans” (talk about ironic). But when you’re at the bottom, there is only one direction to go.

RM Nobody’s offseason really jumps out at me. If you accept that Kent Austin is infallible, you might say Hamilton. That will be interesting to watch.