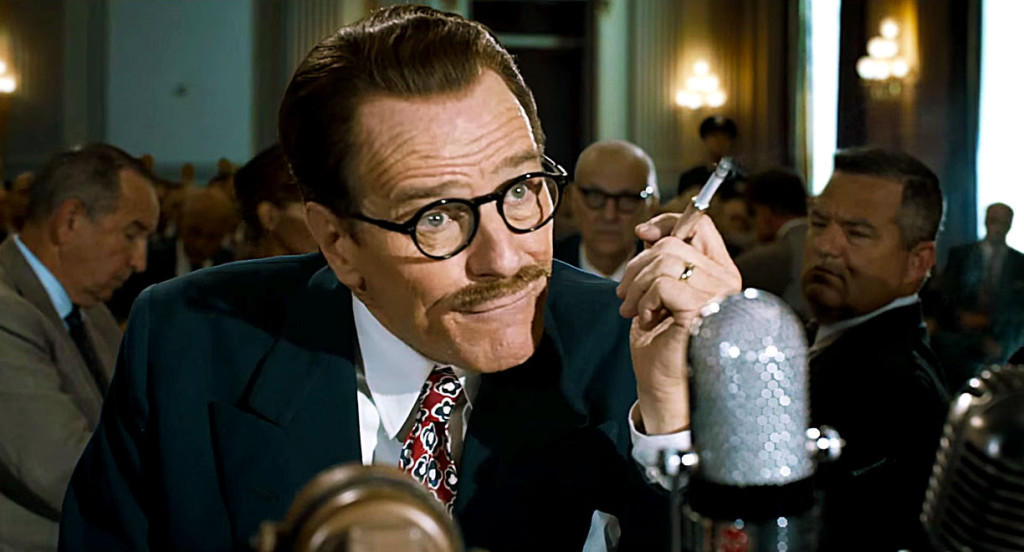 As biopics aiming for gold go, Trumbo packs a bigger punch than your average awards chaser. Sure, the film namedrops the scriptwriter’s greatest hits (Roman Holiday, The Brave One, Spartacus), but never loses sight of what it is about: A man fighting against fear and injustice with cunning, until the suppressive system becomes unsustainable.

The film chronicles the ten years Dalton Trumbo (a terrific Bryan Cranston) spent on the black list, alongside nine other scriptwriters whose livelihood was destroyed because of their affiliation with the communist party. At the time, Joseph McCarthy and his cronies considered Hollywood a weapon of indoctrination the Reds were using to brainwash Americans.

Not one to roll with the punches, Trumbo fought for his freedom of speech and association against a paranoid American Congress, gossip reporter Hedda Hopper, fearful studio heads and the Duke himself, John Wayne, an staunch conservative. He ended up in jail for his troubles.

Trumbo didn’t wait for America to regain sanity. The man run a racket of blacklisted writers who worked in secret for a small studio. How good was he? The man won two Academy Awards using other people as front.

In his first high profile starring role after Breaking Bad, Bryan Cranston delivers: The man once known as Walter White provides the character with a joie-de-vivre that serves as motivation and source of empathy. At no point there is any question who is the smartest man in the room, a feat all the more remarkable since Trumbo never sold out his principles.

With Trumbo, director Jay Roach concludes his transformation from comedic force (the Austin Powers saga, Meet the Parents) to shrewd political observer (Game Change, The Campaign). The film is fascinating except for the segment dedicated to the Trumbo family dynamics, way too pedestrian compared to the fight against the powerful forces at play. A must watch. Three and a half blacklisted prairie dogs.

Trumbo plays from Thursday 14th to Sunday 17th at the RPL Theatre.