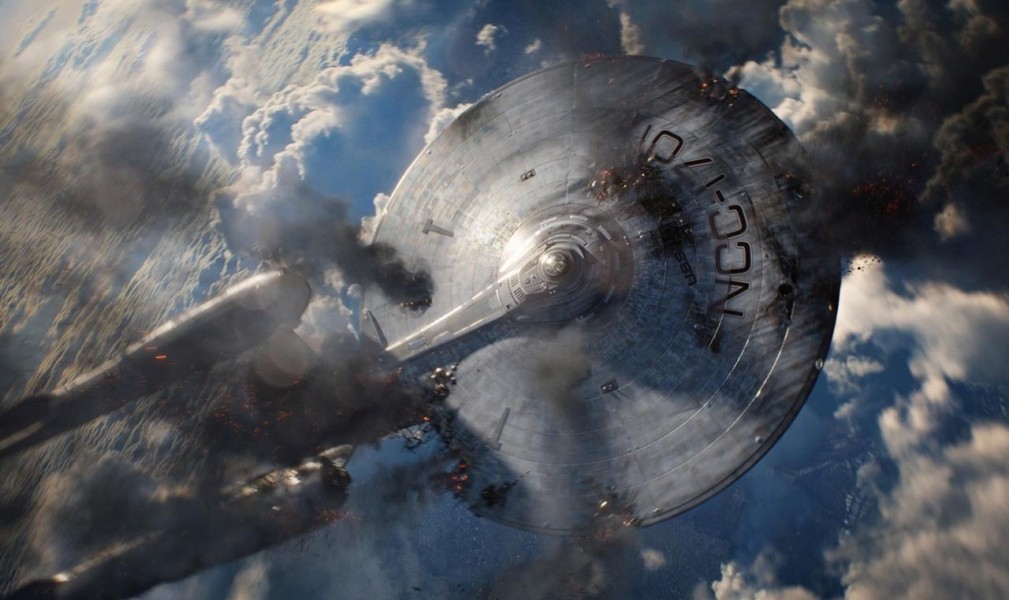 “I forgot to change the oil!”

(It’s hard to write about Star Trek Into Darkness without revealing something. While I’ll stay away from the bigger reveals, beware of some mild spoilers ahead.)

The main difference between previous Star Trek incarnations and the current one is not content, but concentration. J.J. Abrams is extremely respectful of the material, to the point he hasn’t negated the existence of the original saga, but created a parallel timeline so he can develop his own.

Star Trek Into Darkness follows the same pattern established by the reboot from four years ago: Abrams takes a hefty portion of the mythology and repackages it into a tension-heavy rollicking good time.  Even though the action is front and center, the ethical and moral dilemmas that set the Star Trek universe apart (ahead of Star Wars, some would say) provide the poignant background.

True to form, the film kicks into high gear when Captain James T. Kirk (Chris Pine) openly defies the Prime Directive that guides Starfleet operations to save Spock (Zachary Quinto): There can be no interference with the development of alien civilizations, even if that means to leave somebody behind. Kirk is demoted to First Officer, and Spock, reassigned to another ship.

The estrangement doesn’t last long. A disgruntled Starfleet officer named John Harrison (yeah, right) goes on a rampage and the hotheaded Kirk is conveniently appointed to catch him. The Enterprise tracks him down to enemy territory. While passions run high, any false move could cause a major conflict between the United Federation of Planets and the Klingon Empire. Will Kirk keep his cool? (maybe… if he was Shatner)

The villain du jour, John Harrison (Benedict Cumberbach), is smarter and stronger than his pursuers, and his grudge is somewhat justifiable. For most of the movie he is three or four steps ahead of everyone else and that makes him a thrill to watch. He is also Kirk’s polar opposite, not a detrimental feature given the captain’s tendency to shoot first and ask questions later.

Star Trek Into Darkness is at its best whenever dealing with the formidable rival and his motivations. It takes a nosedive every time it focuses on Kirk and Spock’s friendship. The subject was dealt with adequately in the first movie, there is no need to revisit without something new to add. As any good Gene Roddenberry creation Kirk learns a lesson, over and over again, until it sticks. This doesn’t translate well and makes the captain of the Enterprise look like a fool.

Because of the time dedicated to John Harrison’s vendetta and all the new characters (Alice Eve, Kirk’s love interest, is the most superfluous), Sulu and Chekov get the short shrift. Also, as likable as Simon Pegg is, there is way too much Scotty. I get the feeling Pegg and Zoe Saldana (as Uhura) are using their higher profiles as leverage to increase their screen time.

While most of the old throwbacks work, at moments it seems as In Darkness doesn’t have any original ideas of its own. Even the extended climax, in which it seems the film may pull the ballsiest move ever attempted in a summer blockbuster, has a referent in Star Trek checkered backstory.

In Darkness is a handsome movie. The production design alone justifies a trip to the multiplex. Even the 3-D format is put to good use. Because J.J. Abrams never takes his foot off the accelerator, the audience may get the impression the film is better than it actually is. That said, this saga could be great if those involved were to serve the story and not the other way around.

Three and a half red-shirt prairie dogs.