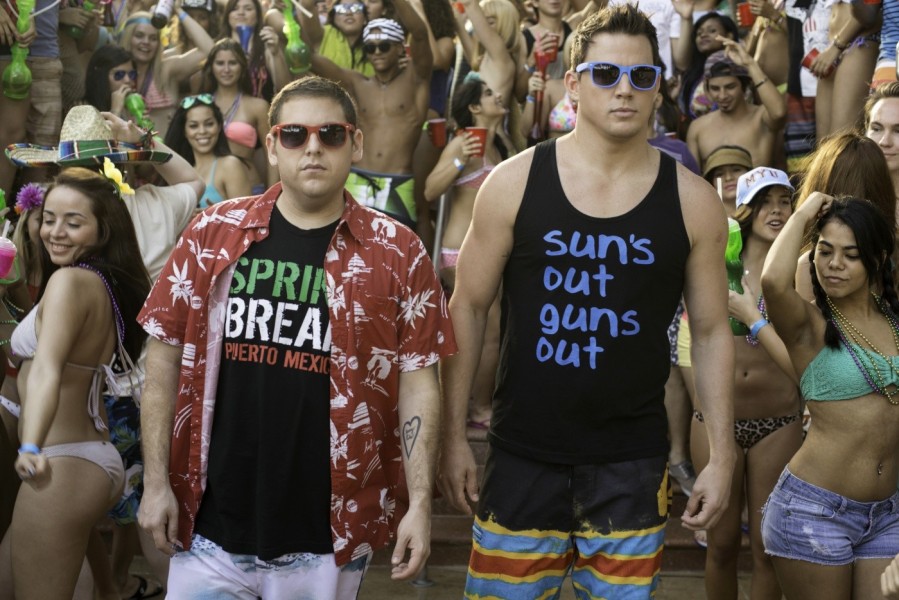 Walking slanted is the new fad.

Even though a follow-up to 21 Jump Street wasn’t that preposterous of an idea, 22 Jump Street treats it as if it was. The outcome is a fun send-off to sequels everywhere, but as a proper movie leaves a lot to be desired.

As it’s overtly uttered time and time again, 22 Jump Street is basically the same movie than the first time around, only bigger and more expensive. Schmidt and Jenko act irresponsibly while on duty, screw up massively and land in the same undercover unit than last time. Although the setting is different –college- the mission is equivalent: Find the supplier of a new drug that has already claimed a life.

The blueprint allows 22 Jump Street to go into some interesting places. The underlying homoerotic tones of the first one are more blatant now. Previous jokes about Jenko and Schmidt being too old for school multiply to the power of ten. Ice Cube in the token role of “mean captain” is given a lot more to do and is the one more likely to break the fourth wall.

The laughs-per-joke ratio is high, not necessarily because of the quality of the script, but because Jonah Hill and Channing Tatum’s chemistry elevates the material. Both actors, who have demonstrated the acting chops for bigger and better things, are clearly slumming it. Overworked directors Phil Lord and Christopher Miller (The Lego Movie, Cloudy with a Chance of Meatballs) keep the proceeding loose and allow Tatum and Hill’s easy rapport to take charge.

It’s evident none of the involved has any intention to return for a third time, to the point they blast any possibility of another sequel during a hilarious end-credits sequence. Extra points for knowing when to bow out.

It occurred to me that…

…the self-referential jabs are not limited to 21 Jump Street. Tatum’s bomb White House Down also gets a backhanded compliment.