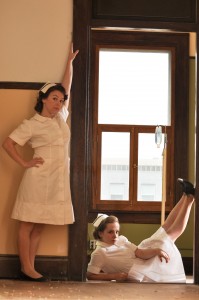 “Immediately, a baby cat started forming … in the cat uterus.”

The great thing about reviewing a show like Dot and Mae: Delusions of Grandeur that’s done through improv is that I can drop in a great line like that from the show, or tell you everything about the characters created last night, and I won’t be spoiling anything.

There are a few things that are constant night to night, though, like the two leads of the show, Dot and Mae, played by Lucy Hill and Judy Wensel respectively. As you can read about in my piece on the show for the prairie dog, the show is set in a 1940s mental institution, where Dot and Mae are a pair of nurses.

The interactions between the two change, however. The nurses a big part of the framework of the show, with a conflict playing out between the two of them. (Last night, it was that a doctor that Mae had kissed on the kisser — Mae’s words — didn’t even know Dot’s name, which throws Dot into an existential crisis involving a failed tattoo.)

As that’s going on, Dot and Mae each visit one of their patients. The one’s that I saw were Molly Westlake and James Margaret, two names taken from the crowd beforehand. Hill and Wensel then act out the obsessions and delusions of these patients, cats and birds respectively for Molly and James, populating their worlds with outrageous and absurd characters that still have real-feeling emotional lives. Then, the worlds of the patients meet, bringing those stories to a close before Dot and Mae resolve their conflict.

Hill and Wensel being gifted improvisers isn’t even a question; their work at Combat Improv is more than enough to prove that. (Next Combat show is Oct, 12, F.Y.I.) Still, their ability to create this world of fantasy, where cats can talk and people and birds can fall in love or whatever happens on subsequent nights of the show, that feels emotionally true is fascinating.

Part of it I imagine comes from them having a great idea of where they want the show to go. The framework helps, but I couldn’t shake the feeling that beyond the chemistry and friendship these two performers share, that they didn’t also have an understanding of the solipsism involved in everyone’s personally fantasies, a narcissism they puncture by the end of the show.

Dot and Mae: Delusions of Grandeur runs until Oct. 8. Go to the Globe Theatre’s site for ticket and showtime information.