REVIEW: Can’t Step on this Ant 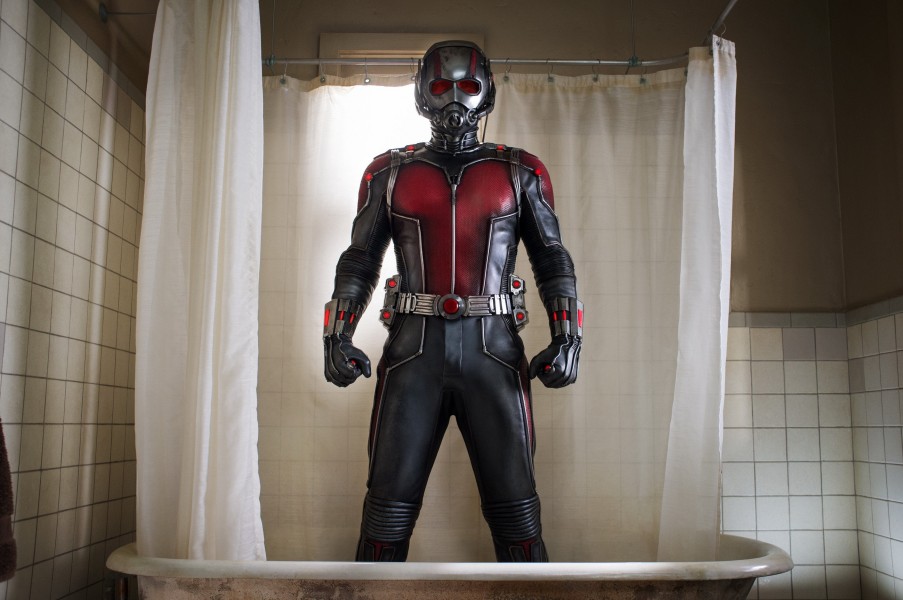 You don’t want to see the inside of that tub up-close.

Things didn’t look good for Ant-Man early on. The outrage over Edgar Wright being sidelined from his pet project, followed by the hiring of a middle-of-the-pack craftsman (Peyton Reed) were particularly worrisome signs. The commissioning of a rewrite (courtesy of comedy specialist Adam McKay) was the cherry on what was expected to be a tasteless cake, at least by comic book geeks around the world.

I’m happy to report Ant-Man is better than it has any right to be. In fact, it’s top tier Marvel. For the most part, Ant-Man is a traditional adaptation (the action sequences are clever, yet few and self-contained), but also one that gets the tone and the flow right. Ant-Man also benefits from the right cast and Marvel’s rarest of beasts: A compelling antagonist.

The Ant-Man in the film adaptation is not top scientist Hank Pym, but Scott Lang, a master burglar going through hard times. Unable to make an honest living, Lang (Paul Rudd) has no alternative but taking the Ant-Man mantle from Pym (Michael Douglas), too old and emotionally scared to use the shrinking suit.

The goal is to prevent Pym’s company –now in hands of an ethically challenged yuppie- from developing technology that would allow an army of miniaturized soldiers. In Lang and Pym’s corner, the scientist’s estranged daughter (Evangeline Lilly) and Lang’s semi-competent team of felons. Against them, the military industrial complex, the law and one or two recognizable faces.

A lot of Edgar Wright (and Attack the Block’s Joe Cornish)’s original script seems to have made it to end. So much so, you could pinpoint the Marvel-ordered lines to tie Ant-Man to the rest of the cinematic universe. The outcome is consistently funny and fully capable of standing on its own, regardless of how many MCU recurring characters drop by (which I won’t spoil here). It’s no surprise Ant-Man’s MVP Michael Peña chose a supporting role in this film over a Suicide Squad membership.

Besides being less “choppy” than most recent Marvel outings, Ant-Man features another noticeable upgrade: The villain. The consistently excellent Corey Stoll (House of Cards, Midnight in Paris) tackles Darren Cross/Yellowjacket with gusto. Cross is not particularly troubled by his dark side taking over (much like Marvel’s evil paragon Loki). Also, his beef with Pym –a surrogate father early on- is meaty enough to explain his choices.

Director Peyton Reed (Bring It On, Yes Man) shows more visual flair here than in any of his previous efforts. The highlights are not even FX-laden: Michael Peña’s rambling flashbacks excel just by being clever. While willing to work within Marvel’s framing, Reed makes Ant-Man relatable. The world is not in immediate danger, yet the stakes are high enough to get the audience invested.

The 3-D factor is, for once, worth the extra buckaroos. Whenever Lang uses the suit, the gimmick kicks in. This strategy pays off nicely during training sessions: Ant-Man’s warped reality feels more foreign and harder to manoeuvre. This ain’t Honey, I Shrunk the Kids.