Posted by James Brotheridge | May 6, 2011 | Uncategorized 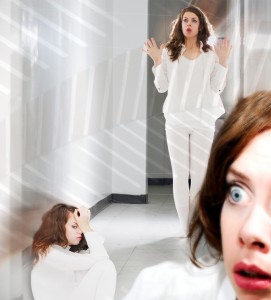 All the forms of self-help voodoo – books, seminars, T.V., you name it – form a big, dubious industry. The rows and rows of self-improvement tomes to be found at bookstores keep selling and selling, even if the continued existence of so many of them suggests that maybe, just maybe, they don’t actually work that well.

I think Kirsten Marie Rasmussen would agree with me on that last point. In the programme for Blink Blink Blink, her one-person show put on at the Globe Theatre as part of the Shumiatcher Sandbox Series, Rasmussen says that the seed of the show was her own dissatisfaction with the self-help books she’d bought and read.

Her experience in the area is evident. So many hallmarks of the genre make their way into Blink Blink Blink, from unnecessary lists to strained analogies to ceaselessly-repeated catchphrases.

There was a question that occurred to me while watching the show. See, the protagonist of Blink Blink Blink, Sara Tonin, gives the audience the seminar that accompanies her book, Skin the Bunny: An Aggressive Approach to Claim Back Your Life. As such, Rasmussen involves the audience in a few exercises, where cussing or what have you might purge you of some demons.

The question: If self-help could ever work, could it be effective when the seminar is firmly satirical?

If that kinda paradox is possible, Rasmussen might be the person to do it. She’s an accomplished performer. The Regina-born artist was a member of Edmonton’s Rapid Fire Theatre before moving to Montreal, where she co-founded the Montreal Improv Theatre and where her credits continue to amass.

Her skill as a performer is unquestionable. Her choreography in Blink Blink Blink, especially a violent, repeated sequence throughout the piece, was compelling. She also has a physical charisma that gives the work a great clarity.

Not to mention that’s she’s funny, off script and on. As you could imagine, lampooning self-help eccentricities lends itself well to comedy, which Rasmussen exploits. At the same time, part of the design of the piece is that off-the-cuff remarks on her part can be worked in organically, mostly in the seminar portions.

One of the more compelling elements of the piece, though, and one that speaks greatest to the meaning of the whole is the narrative structure. The seminar parts, occasionally soundtracked by one of the top five Queen songs ever, give glimpses into Tonin’s life and greater views into the character’s psyche. The audience also gets to see Tonin outside of that context, where her personal life leaves much to be desired.

Another narrative pops up throughout Blink Blink Blink as well. Without spoiling anything, a story told by Tonin herself seems to have escaped her control. An analogous tale of a rabbit crippled by fear, and the other rabbit character that populate his world, goes places Tonin might not have imagined it going.

So much of the central self-help dogma that this performance takes on is about reclaiming your personal narrative. But can’t theatre be an expression of that same thing on a personal level for the performer?

The problem seems intrinsic to the arena of self-help. An Anthony Robbins cameo in Shallow Hal might convince me that Robbins isn’t a terrible guy, but nothing about him convinces me that there’s a giant within me that needs awakening. It’s all marketing fluff.

In Blink Blink Blink, individuals seem to need to recognize themselves as complex, and need to move away from the strictly prescriptive ways of all the Rhonda Byrnes and Louise L. Hays of the world towards some acceptance of who you are.

Blink Blink Blink runs at the Globe Theatre until May 14. More information can be found on their website.

Rasmussen is also doing a performance before next week’s Combat Improv. On Wednesday, May 18, she’ll be performing Dick and Honey’s Guide to Successful Living, alongside Brent Skagford at the Exchange at 8 p.m. More information can be found on the Facebook event page.