The CBC is reporting that some dimwits at the Craven Country Jamboree are flying Confederate flags. And I hope we can all agree that’s an extremely uncool thing to be doing right now.

The excuses offered by the dimwits are of the “I don’t see the big deal,” variety.

“Everything’s getting blown up way too much. It’s just a flag,” says one of the Confederate flag lovers.

And that got me thinking. We need a flag we can fly in protest of such idiocy. Up top is my first, hasty attempt. 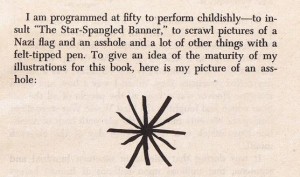 I based the design off one of Kurt Vonnegut’s illustrations for Breakfast of Champions.

Now, I do understand that the message you might take away from the Redneck Asshole Flag is, “Rednecks are stupid, racist assholes.”

And, you know, I don’t actually think that all rednecks are stupid, racist assholes. In fact, it seems from the CBC piece that there may only be two Confederate flags flying at all of Craven. That’s a minuscule number when you think of how many people are up there right now.

I’m betting most of the country music lovers at Craven aren’t very stupid or racist at all. (Though, I am a little surprised and disappointed that they haven’t publicly condemned these Confederate flag fanatics and shamed them into taking the flags down.)

And I’m also heartened to learn that the organizers of the Craven Jamboree were already planning to encourage anyone flying a Confederate flag to take it down. That seems to be a very sensitive and sensible position to take.

But you know what, despite all that, I’ve grown kind of fond of my Redneck Asshole Flag and am considering producing a few to fly during this Craven Jamboree and all the Jamborees to come.

Try and stop me.

And if somebody gets offended by my Redneck Asshole Flag — says it’s demeaning to farmers or rural folk or southerners or country music fans — well, I think it’d be fair for me to respond, “I don’t see the big deal. It’s just a flag.”