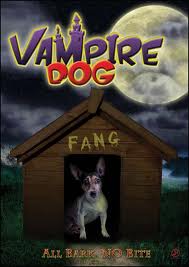 Sunday at 2 p.m. at the Royal Saskatchewan Museum Theatre, Trilight Entertainment will be screening its new feature film Vampire Dog. The film, Trilight notes in its press release, was shot entirely in Saskatchewan with the assistance of the Saskatchewan Film Employment Tax Credit. Over 200 people were employed in the making of the film in Regina and Moose Jaw, and over 90 per cent of the cast consists of Saskatchewan performers.

Trilight describes Vampire Dog as a family-friendly film about a boy who inherits a 600-year-old talking dog from his Transylvanian grandfather. Students from several local elementary schools have been invited to the premiere, and proceeds from the screening will go to benefit the Regina Humane Society.