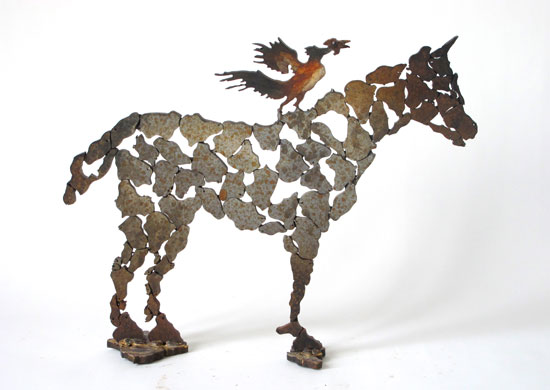 Later this week (Saturday, Sept. 29  from 1-4 p.m., to be precise) there’s an opening for a new exhibition called Fresh Evidence by renown Saskatchewan sculptor Joe Fafard at a pop-up gallery being run with his son Joel. The gallery is located at 631 College Ave.

The exhibition will be the first solo show in Regina by Fafard since a 2007 retrospective that was co-organized by the MacKenzie Art Gallery and the National Gallery of Canada. That show later travelled to five other galleries, including a stop in Ottawa.

Despite the lengthy interval between shows in Regina, though, Fafard has been far from idle. “I’ve been having two or three shows a year in places like Vancouver, Edmonton, Calgary, Winnipeg, Toronto, Montreal and Halifax,” he said in a recent interview. He’s also worked on several large-scale commissions for organizations like Le Maison des Artiste in St. Boniface (Manitoba) and Manitoba Hydro headquarters in Winnipeg.

“Every exhibition I have, I like to show some progress or innovation,” Fafard adds. “Lately, I’ve been experimenting a lot with laser cuts and powder coating. As well, I’ve continued to cast in bronze doing patinas, and have been playing around with scale. Rather than work small, I’ve been producing larger pieces like a bust of Gabriel Dumont that’s nearly three feet tall that will be included in this show. As well, there will be some welded steel pieces that are assembled from bits of odd shapes that are out-cuts from other laser-cut sculptures that I’ve done.” (that’s an example pictured above)

For a large chunk of his career, which dates back to the mid-1960s, Fafard has been represented in Regina by the Susan Whitney Gallery and the successor operation Nouveau Gallery run by Megan Perreault. With this latest venture, Fafard says, “I’ve decided to explore different ways of showing work. I don’t want to be in a stable, but rather be free to take advantage of changing ways of marketing art. With the Internet, things have changed considerably in the last ten years and the days when artists are like horses in a [dealer’s] stable have changed as well. Artists now can be more independent. This pop-up show that Joel and I have planned for Regina is an experiment along those lines.”