Unless you count thickets of rebar upturned from the digging as architecture, the first pieces of vertical construction have been set up on the 12th Ave Plaza. Three of the cylindrical light standards that will run along Scarth and the south edge of the plaza appeared while I was in a writers’ meeting this afternoon. You can seem them at left.

This is an encouraging sign. So far, despite promises from city hall that things are progressing adequately, all that’s been apparent on this project is a whole lot of crater making.

I imagine many will take heart to see some indication of what the plaza will eventually look like popping up.

Still, is it just me, or do these thing look an awful lot like a lightsabers?

(Below are a few more pics of the plaza project. Click to embiggen!) 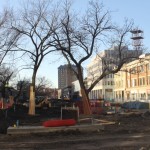