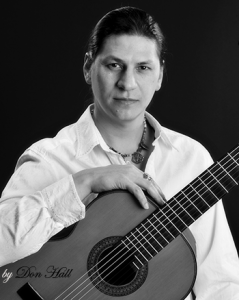 Born in San Salvador, El Salvador Ramses Calderon (pictured) began studying music when he was 11. His area of expertise is classical guitar, and he studied with several disciples of a famous Latin guitarist named Agustin Barrios (1885-1944).

Since coming to Canada in 2000, Calderon has collaborated with a number of Canadian artists in different disciplines — music, dance, visual art, and film. On March 2, in fact, he headlined a show called Latin Blend that was co-presented by the Regina Symphony Orchestra and Sakewewak Artist-Run Centre at Westminster United Church.

Thursday night, Calderon is launching a CD called Cuerdas de la Historia at Artesian on 13th at 8 p.m. Tickets are $15 advance and $20 at the door.

The CD includes some original compositions by Calderon, along with a selection of historical pieces from El Salvador and Central America that date back to the 18th century. After this performance, Calderon will be playing additional concerts in Canada, Cuba and Central America as part of a nine-date tour.