Pick of the Day: Riders vs. Stamps 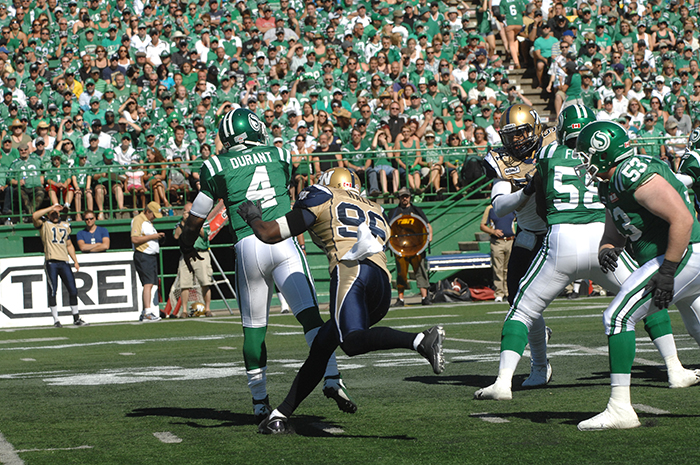 This has been a weird CFL season for the Green & White as far as scheduling goes. Since opening the year in Hamilton in late June, the Riders have played alternating series of back-to-back home and road games.

The last time the Riders took the field at Mosaic Stadium on Sept. 2 they trounced the Blue Bombers 52-0 in the Labour Day Classic (game photo above). Since then, the Riders have played road games in Winnipeg (a 25-24 victory on Sept. 9) and Montreal (a 28-17 loss on Sept. 16). Now they’re back home for two straight against the Calgary Stampeders (today at Mosaic Stadium/TSN at 2 p.m.) and the B.C Lions next Saturday night.

Sitting at 5W-6L, the Riders trail the 7W-4L Stampeders by four points in the standings. Lose this game, and the team can kiss any hope of finishing second and hosting a CFL West playoff game goodbye. A win and they’re still in the hunt, although it won’t be easy as in their remaining six games the Riders play B.C. twice, and also have a home and home with the Toronto Argonauts who are arguably the top team in a somewhat weak CFL East.

After sitting out portions of the two games against Winnipeg, and the entire game against Montreal, Rider QB Darian Durant is supposed to get the start. Back-up Drew Willy played decent in place of Durant, but he could benefit from a bit more seasoning, so Rider fans should welcome Durant’s return. If he’s healthy, he does add an extra dimension to the Rider offence with his scrambling ability.

On defence, head coach Corey Chamblin has vowed that heads will roll if Calgary RB Jon Cornish repeats his performance from an Aug. 25 game at Mosaic Stadium when he rushed for a whole shitload pile of yards. That tilt was played in extremely windy conditions, if you recall, and Cornish’s success against the Rider D helped Calgary move the ball into the wind.

Following that game, the Riders added middle linebacker Joe Lobendahn (a.k.a. the Denyin’ Hawaiian) to the roster. He’s helped the Riders bolster their run defence, certainly. But the Green & White have to guard against one dimensional thinking. In mid-July Calgary receiver Nik Lewis scorched the Rider secondary big-time in a 41-38 OT victory for the Stamps. In the Aug. 25 rematch, the Riders were determined to stop Lewis. They did that, but Cornish ran wild. That’s the way football is. It’s like a chess match. You make a move, and the opponent counters. So hopefully the Riders won’t be so focussed on stopping Cornish that they leave themselves vulnerable through the air.

One final point. After starting strong as a replacement for Chris Milo on field goals, Sandro DeAngelis has tailed off a bit and now sits with a 73 per cent success rate (14 field goals on 19 attempts). That’s adequate, but not great. Especially since missed field goals are proving to be a boon for CFL return men with many missed kicks resulting TDs the other way or long returns.

I’m not one for predictions, but if anyone wants to venture a guess on the game’s outcome feel free.