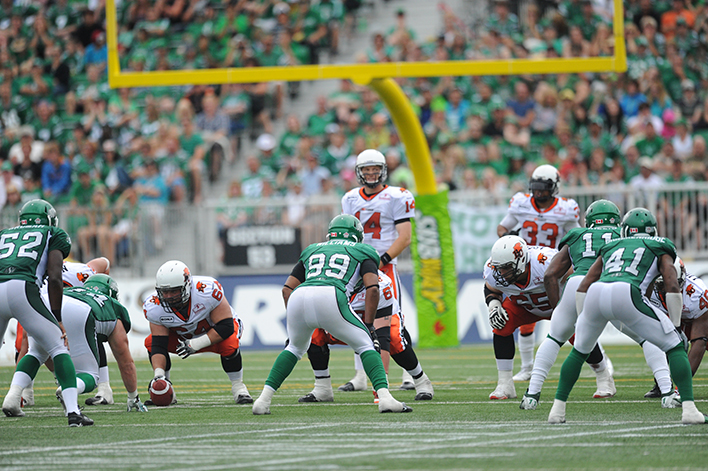 After the stellar job Ron did before the last Rider home game against the B.C. Lions on July 14 of correctly forecasting the final score (23-20 Riders) I should let him do the preview honours for the game this afternoon against the Hamilton Tiger Cats.

In week one, you probably remember, the Riders demolished the Tabbies 43-16 at Ivor Wynne Stadium thanks to huge games by QB Darian Durant (25 of 34 passing for 390 yards and four TDs) and receiver Weston Dressler (13 catches for 180 yards and three TDs).

Since then, Hamilton has shown steady improvement, losing a tight game 39-36 to the B.C. Lions in Vancouver in week two before recording solid home victories over the Toronto Argonauts (36-27) and Montreal Alouettes (39-24). The Riders, meanwhile, followed up their initial W with wins against Edmonton Eskimos (17-1) and the Lions, before stumbling last week and losing in OT to the Calgary Stampeders 41-38 after they gassed a 17-point lead with nine minutes to play.

I didn’t see that game, but heading into the season I expected the Green & White to struggle more than they have so far this year. Rider fans doubtlessly hope that those last error-filled minutes in Calgary were an aberration and that the team will return to their winning ways when they take the field later today. One plus that’s worked in their favour so far is the much vaunted 13th Man. With an extra four thousand or so fans in the stands in the first two home games opposition offences have had problems communicating and that’s led to penalities and other miscues. And another near capacity crowd is expected for this game too.

As indicated by their point totals in the last three games, Hamilton’s offense has started to perform according to pre-season expectations following the acquisition of veteran QB Henry Burris and all-star receiver Andy Fantuz — although receiver Chris Williams has certainly padded those point totals with some impressive work on special teams.

The key to the Riders winning, it would seem, is to eat up the clock with a ball control offence that mixes power running by Kory Sheets with precision passes by Durant to Dressler and Getzlaf. The Riders plan to audition some new import receivers, and if they can stretch the defence a bit that will go a long way to opening up the short game. As well, while Tristan Jackson doesn’t quite have Williams’ stats on special teams, he’s broken several big returns. If he can do some more damage today, it will help the Riders a lot as far as field position goes.

3 thoughts on “Pick of the Day: Riders vs Hamilton Tiger Cats”