Pick Of The Day: Riders vs. Eskimos 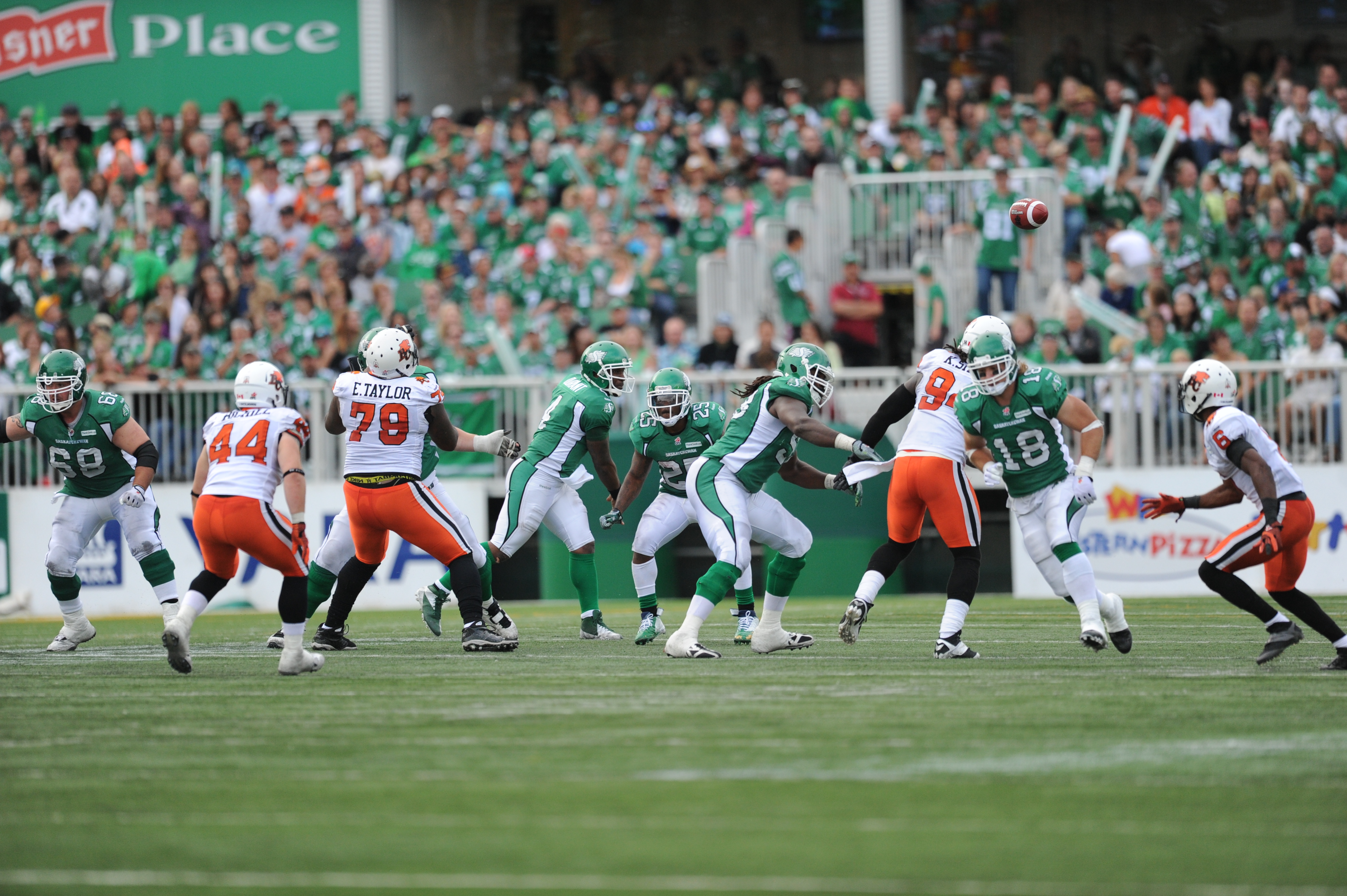 With their surprise win against the Lions in Vancouver on Oct. 4 the Riders took a giant step toward turning their season around and remaining in the hunt to represent the West in the Grey Cup in Regina on Nov. 24. Had they lost, they almost certainly would have finished third in the West and been faced with the Herculean task of winning two play-off games on the road to reach the Grey Cup (the West semi-final in Vancouver most likely, then if they won that, the West final in Calgary).

But with the 31-17 win, which avenged a last-play 24-22 loss to the Leos at Mosaic Stadium on Sept. 22 (game photo above), the Riders vaulted back into contention for a home playoff game—most likely the semi-final, but with an outside shot at hosting the final depending on how the schedule unfolds.

Of the three CFL West contenders, the Riders have the easiest schedule. In their four remaining games, they have the lowly Eskimos twice at home (today and on Nov. 2.) They also have B.C. at home on Oct. 19, and play the Stamps in Calgary on Oct. 26. Besides the Rider tilt, the Stamps are in Edmonton on Oct. 18, and have a home-and-home with B.C. on Oct. 11 in Calgary and Nov. 1 in Vancouver. Besides Calgary twice and Saskatchewan, B.C. hosts Edmonton on Oct. 25. So depending on how the Ws and Ls stack up, teams could rise or fall in the standings pretty easily.

I didn’t see the B.C. game, but I gather from the highlights and news reports that the Rider O, bolstered by the return of star running back Kory Sheets, did a far better job of establishing the run and widening the field a bit with swing passes and quick hitters to keep the B.C. defence honest. On defence and special teams the Riders were sound, and the result was a well-earned victory.

As for Edmonton’s last outing, I did see the first half of their game against the Alouettes in Edmonton last Saturday afternoon when I was visiting my dad at his seniors’ residence. I doubt if a team has played a worse first half of football in the league this year. After the hellacious hit he took the week before in the Argo game, I was surprised that Esk QB Mike Reilly started. He struggled a fair bit, and was replaced in the second half, but really the whole team stunk. And everything that could go wrong did go wrong. At half-time the Als were up 31-3, and they coasted to a 47-24 victory.

There’s no doubt about it, at this point in the season the Esks are a train-wreck of a football team. If you combine the second half of the Argo game with the first half of the Alouette game, the Esks were outscored 64-10! That’s quite a 60 minute stretch of football. Still, they did manage to build a 15-1 half-time lead against the Argos before collapsing in the second half, so they’re not a total pushover. The Riders are at a point in the season where they need to build momentum. After their solid performance against the Lions they’re in a position to do that. But they’ll need another solid outing against the Esks to make it happen.