Pick of the Day: My Week With Marilyn 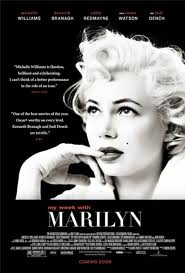 A young British man named Colin Clark worked as a production assistant on the film. Nearly four decades later, he published a diary chronicling his experiences working on set. He apparently omitted one week though, and later published an account of the missing week. It’s this account that forms the basis for this film, which stars Michelle Williams as Monroe and Kenneth Branagh as Olivier.

My Week With Marilyn screens tonight at the RPL Theatre at 7 p.m. Here’s the trailer.