Pick of the Day: Miesha & the Spanks 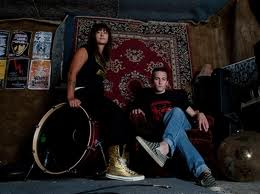 I can’t vouch for the anecdote’s accuracy, but in an article previewing a 2009 Montreal gig by this Calgary garage rock duo (that’s them pictured at left) in Vue Weekly mention is made of a stop Miesha Louie (guitar) and drummer Justin Landstorfer made in Halifax with the Hot Blood Bombers where a member of the touring party (they scrupulously declined to identify who) spent a night in jail.

It was late, Miesha recounted, they were a block from where they were supposed to stay, and they got pulled over for having a wonky turn signal. One of the group  was hammered and ended up being taken away by the police.

Tonight, Miesha & the Spanks are at O’Hanlon’s Pub with the Pine Tarts.

Also on tonight, Braindead Romeo is at the Exchange.

To close, here’s a recording of the Miesha & the Spanks’ song “Mountain Man“.